Home is Where the Hurt Is: Racial Socialization, Stigma, and Well-Being in Afro-Brazilian Families 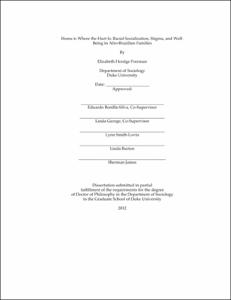 This dissertation examines racial socialization in Afro-Brazilian families in order to understand how phenotypically diverse families negotiate racial hierarchies and ideologies of white supremacy. As an inductive, qualitative project, this research is based on over fourteen months of ethnographic fieldwork in Salvador, Bahia, Brazil in fifteen poor and working-class Bahian families and 116 semi-structured interviews with family members and informants. Findings suggest that one of the most prominent features of racial socialization is the pervasive devaluation of black/African influences, which is conveyed through implicit and explicit messages as well as concrete practices (including rituals) that promote the stigmatization of negatively valued racialized physical features. The study reveals a pattern of unequal distribution of affection based on racial appearance (phenotype), which is evident in parent-child, sibling, extended family, and romantic relationships. Findings suggest that negative appraisals of racial phenotype may significantly compromise affective bonds in families and have social psychological consequences impacting self-esteem and sense of belonging, while also eliciting suicidal ideations and anxieties. These outcomes are most pronounced for Afro-Brazilian females. Racial socialization also conveys the "strategically ambiguous" logic of color and racial classification, uncritically exposes family members to racist messages, jokes, and stereotypical images of Afro-Brazilians, and encourages cultural participation that superficially valorizes Afro-Brazilian culture and fosters nationalism, rather than racial identity. In contrast to traditional findings of racial socialization in the U.S., messages valorizing racial heritage are rare and efforts to prepare family members for bias rely on universal terms. Families do employ counter-discourses and creative strategies of resistance; and so, racial socialization is characterized by practices that reflect both resistance and accommodation to racial hierarchies. I conclude that racial socialization in families is influenced by and sustains racialization processes that maintain the broader system of white supremacy. Contrary to how racial socialization has been framed as having a purely protective role in families, this study illustrates how it may disadvantage blacks vis-à-vis whites and uniquely stigmatizes the most "black-looking" family members vis-à-vis those who more closely approximate an idealized (whiter) somatic norm. Future studies should triangulate data on racial socialization from other regions of the Americas.