Public Support, Family Support, and Life Satisfaction of the Elderly: Evidence from a New Government Old-Age Pension in Korea 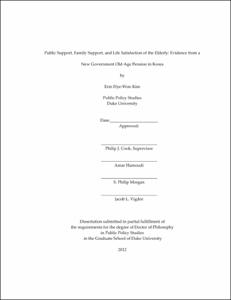 Population aging is a global phenomenon occurring both in developed and less developed countries. While families are still playing an important role in providing support for elderly people, governments are also expanding their public old-age support programs in many societies. Public pensions are one of the major policy tools geared to social protection of the elderly. However, little is known about how the programs affect elders particularly in terms of their subjective well-being. Such effectiveness depends in part on the extent to which public pension income displaces or `crowds out' family elder support. Using the introduction of the Basic Old-Age Pension (BOAP), a non-contributory old-age pension in Korea, this dissertation examines the relationship among public support, family support, and life satisfaction of the elderly.

As an introductory chapter, chapter 1, "The continuing importance of children in relieving elder poverty: evidence from Korea," describes the actual financial status of elderly Koreans and the amount of financial support they receive from children. Analysis of the 2006 Korean Longitudinal Study of Ageing shows that almost 70 per cent of Koreans aged 65 or more years received financial transfers from children and that the transfers accounted for about a quarter of the average elder's income. While over 60 per cent of elders would be poor without private transfers, children's transfers substantially mitigate elder poverty, filling about one quarter of the poverty gap. Furthermore, children's transfers to low-income parents tend to be proportionally larger, so elder income inequality is reduced by the transfers. Over 40 per cent of elders lived with a child and co-residence helps reduce elder poverty.

Using the introduction of BOAP, chapter 2, "Does money buy happiness?: Evidence from a new government pension in Korea," assesses how the program affected elders' life satisfaction. Notably, this study adds valuable evidence to the literature of whether money buys happiness, a question of great interest but notoriously difficult to answer given the difficulties associated with isolating income as a causal factor. To make the causal inference, this chapter utilizes a difference-in-difference research design and analyzes longitudinal data from the Korean Retirement and Income Study (KReIS). Results show that BOAP did raise elders' life satisfaction: annual benefits of 1,000 kW, approximately 1,000 U.S. dollars, raised elders' life satisfaction by 0.16-0.22 of one standard deviation and the effect was statistically significant.

Chapter 3, "Public support crowds out family support: Evidence from a new government pension in Korea," investigates how public financial provision affects family support. In particular, the present study provides a novel estimate of crowd-out by BOAP by using a combined measure of financial support and in-kind support received from all adult children regardless of their co-residence status with elderly parents. This paper also examines the impact on co-residence and is the first quasi-experimental study on the crowd-out question using data from an Asian nation. Results from difference-in-difference analyses of the KReIS data show that every $1 from the pension led to a 30-cent drop in children's support, netting a 70-cent increase in elders' income. The impact on the likelihood of elders' co-residing with children was positive but not statistically significant.

By showing that Korean children still play a crucial role in providing financial old-age security, chapter 1 demonstrates how important it is for the Korean government to design old-age policies that preserve the incentives for private assistance. The second chapter suggests that, at least in the context of modern-day Korea, pensions do buy happiness, or at least satisfaction. This finding suggests that researchers and policymakers need to pay further attention to public pensions as a tool to intervene people's subjective well-being. Finally, chapter 3 confirms that crowd-out of family support does occur in Korea and that increases in income, more so than other factors, have a positive impact on elders' life satisfaction found in chapter 2. These findings may generalize to other rapidly changing societies with a strong family elder-support tradition and emerging public elder-support system.