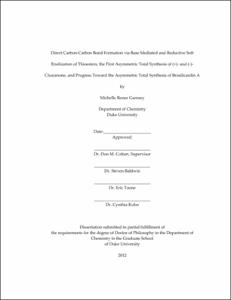 Three methodology studies and two total synthesis endeavors are presented. First, a study of Lewis acid and hydrogen bond mediated soft enolization of thioesters and their addition to imines in the Mannich reaction is reported. MgBr2*OEt2 and Hunig's base are used in concert with bulky thioesters and aromatic aldehydes to generate syn-b-aminothioesters with moderate diastereoselectivity and yield. Next, a biomimetic organocatalytic Mannich reaction is presented using a chiral cinchona alkaloid to effect the enantioselective addition of an imines to thioesters with high yield and diastereoselectivity and enantioselectivities up to 88:12.

The direct addition of enolizable aldehydes to a-iodo thioesters to produce b-hydroxy thioesters enabled by reductive soft enolization is reported. The transformation is operationally simple and efficient and has the unusual feature of giving high syn-selectivity, which is the opposite of that produced in the aldol addition with (thio)esters under conventional conditions. This method is tolerant to aldehydes and imines that contain acidic a-protons, as well as electrophiles containing other acidic protons and base-sensitive functional groups.

The development of a strategy for the asymmetric synthesis of a large portion of the polycyclic polyprenylated acyl phloroglucinols via N-amino cyclic carbamate hydrazones, and its application to the first asymmetric total synthesis of both (+)- and (-)-clusianone is discussed. The clusianones are synthesized with an er of 99:1 and their anti-HIV activity is found to be 1.53 and 1.13 &#61549;M, respectively. A library of clusianone-like compounds is synthesized and their biological activity has been probed.

Finally, efforts towards the total synthesis of brasilicardin A are reported. An appropriate model system was synthesized, and conditions were established using a pinene-based aldol reaction to synthesize the b-methoxy-a-amino ester side chain of the molecule. Next, efforts toward the synthesis of the anti-syn-anti- perhydro-phenanthrene core are discussed.