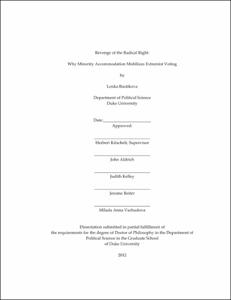 How can we explain variation in support for radical right parties over time and across post-communist democracies? This project suggests that support for radical right parties is driven by the politics of accommodation, and is aimed at counteracting the political inroads, cultural concessions and economic gains of politically organized minorities. It differs from other studies of extremist politics in three primary respects: (1) Unlike current approaches that focus on competition between the extreme and mainstream parties, I emphasize dynamics between the radical right party and non- proximate parties that promote minority rights. (2) Several approaches argue that xenophobia drives support for the radical right, whereas I show that xenophobia is not a distinct feature of the radical right party support base; what differentiates radical right voters from other voters is opposition to governmental transfers towards politically organized minorities. (3) I endogenize issue salience and identify coalition politics - i.e., coalitions of mainstream parties and parties supporting minority protection - as a key mechanism that increases the salience of identity issues in political competition, and benefits radical right parties. The project tests these propositions empirically, and finds supportive evidence using two unique micro-level surveys and an original party-election-level data set covering all post-communist democracies.