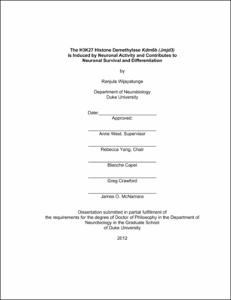 Changes in gene transcription driven by the activation of intracellular calcium signaling pathways play an important role in neural development and plasticity. A growing body of evidence suggests that stimulus-driven modulation of histone modifications play an important role in the regulation of neuronal activity-regulated gene transcription. However, the histone modifying enzymes that are targets of activity-regulated signaling cascades in neurons remain to be identified. The histone demethylases (HDMs) are a large family of enzymes that have selective catalytic activity against specific sites of histone methylation. To identify HDMs that may be important for activity-regulated gene transcription in neurons, we induced seizures in mice and screened for HDMs whose expression is induced in the hippocampus. Among the few HDMs that changed expression, Kdm6b showed the highest induction. Kdm6B is a histone H3K27-specific HDM whose enzymatic activity leads to transcriptionally permissive chromatin environments. In situ hybridization analysis revealed that Kdm6b is highly induced in post-mitotic neurons of the dentate gyrus region of the hippocampus. We can recapitulate the activity-dependent induction of Kdm6b expression in cultured hippocampal neurons by application of Bicuculline, a GABAA receptor antagonist that leads to synaptic NMDA receptor activation and calcium influx. Kdm6b expression is also induced following application of BDNF, a neurotrophic factor that is upregulated in the seized hippocampus. To investigate possible functions of Kdm6b in neuronal development, we performed in situ hybridization analysis that allows for the identification of regions with high Kdm6b expression that could be sites of potential function in the developing mouse brain. We found high levels of Kdm6b expression in the inner layer of the external granule layer of the cerebellum, a region where pre-migratory immature neurons reside and a site of significant apoptosis. On the basis of this data and the fact that intracellular calcium signaling arising from synaptic firing supports neuronal survival, we explored the necessity for Kdm6b in the survival of cultured cerebellar granule cells. Knock down of Kdm6b by RNAi increases cell death, demonstrating that Kdm6b contributes to neuronal survival. Ongoing experiments are addressing the role of Kdm6b in neuronal differentiation. Overall these data raise the possibility that stimulus-dependent regulation of Kdm6b, and perhaps regulation of H3K27 methylation mediated by Kdm6b, may contribute to the regulation of gene expression in neurons and thus to their proper development and plasticity.