Development of RNA Aptamers and Antidotes as Antithrombotic Therapeutics 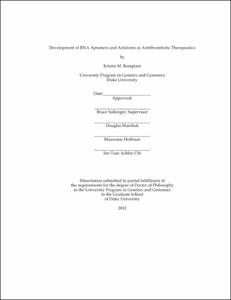 Thrombosis, or pathological blood clot formation, is intimately associated with cardiovascular disease and is the leading cause of morbidity and mortality in the western world. Antithrombotics are commonly prescribed as prophylactic medications or as rapid onset anticoagulants in acute care clinical settings. Although a number of antithrombotics are clinically available, their use is limited by immunogenicity, toxicity, and inability to be controlled with an antidote in the event of hemorrhage. Therefore, new antithrombotics that are effective, yet can be rapidly controlled are urgently needed.

Aptamers are oligonucleotides that form complex secondary and tertiary structures based on intramolecular base pairing and nucleic acid folding that allows them to bind to molecular targets with high affinity and specificity. Aptamers can be isolated that bind to proteins, such as clotting proteins, and modulate protein function. However, unlike most currently used antithrombotics, aptamers can be directly controlled with an antidote and therefore represent a safer class of therapeutic agents.

A number of anticoagulants are in development, and a wide debate regarding the optimal protein target for anticoagulation is underway. We have previously generated anticoagulant aptamers to human coagulation factor VII, factor IX, factor X, and prothrombin. I compared the effects of these four anticoagulant aptamers to determine their impact on thrombin generation and clot formation. Each aptamer exerts its own unique effect on thrombin generation/clot formation, depending on the role that its protein target plays in coagulation. These studies provide valuable data regarding target validation and the anticoagulant effects of different therapeutic aptamers.

Robust anticoagulation is required during acute clinical surgical procedures to treat thrombosis. Currently used anticoagulants have several untoward side effects and most are not antidote controllable. I tested the effects of combining two anticoagulant aptamers to assess potential drug synergy. Several combinations of two anticoagulant aptamers were synergistic and severely impaired blood clot formation. One specific pair of aptamers that targeted factor X (FX) and prothrombin in combination was extremely potent and could keep blood fluid in an ex vivo model of extracorporeal circulation. Additionally, this pair of aptamers could be functionally modulated with two different types of antidotes. In conjunction with antidote reversal, this strategy of combining aptamer anticoagulants may prove useful in a variety of highly prothrombotic acute clinical settings.