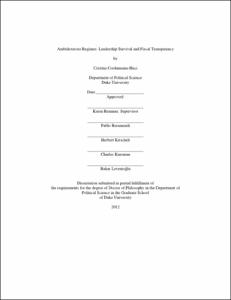 How do political leaders strategically manage fiscal policy formation to enhance their political survival? What are the implications of the fiscal mechanics of survival for theories of redistribution and democratic transition? This dissertation examines the complex relationship between political regime types and fiscal information asymmetries. I focus on budgetary policies (taxation and public spending) as major strategic tools available to the executive for co-optation and punishment of opponents. I argue that allowing some degree of contestation and transparency on the fiscal contract in electoral authoritarian regimes helps the executive identify distributive claims and co-opt the opposition. Paradoxically, in new democracies, political survival depends more on lower levels of budget transparency than existent theories would have us expect. Chapters 1 and 2 present a general formal model from which I derive the major hypotheses of the study. Second, Chapters 3, 4 and 5 use new cross-national measures of fiscal transparency and test empirically the theoretical implications. The statistical models confirm the main theoretical intuitions. Finally, Chapter 6 compares in greater detail the evolution of fiscal transparency in Morocco, Turkey and Romania between 1950 and 2000. I argue that fiscal taboos closely followed the shifting political alliance and their distributional consequences for leader's survival.