Therapeutic Aerobic Exercise in a Mouse Model of Breast Cancer: Effects on Tumor Progression, Angiogenesis, and Response to Chemotherapy 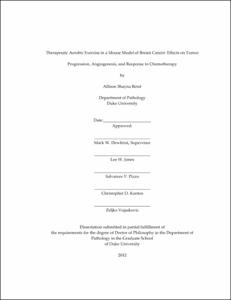 Over the past decade, exercise has gained increasing attention from both clinicians and patients as a beneficial adjunct therapy to maintain or enhance quality of life in breast cancer patients. Recent epidemiological studies indicate that aerobic exercise following a diagnosis of breast cancer may be associated with reductions in cancer-specific and all-cause mortality. However, the mechanisms by which physical activity affects tumor physiology are poorly understood. Accordingly, clinicians lack critical information to properly advise breast cancer patients on the use of exercise as an adjunct to more conventional therapies.

The beneficial effects of exercise on systemic vasculature are well known, including improved endothelial function and increased perfusion. In this work, we evaluate the hypothesis that exercise slows tumor growth and improves the structure and function of tumor blood vessels, resulting in decreased hypoxia and increased effectiveness of cyclophosphamide chemotherapy

To investigate the effects of exercise on tumor microenvironment, we injected syngeneic 4T1 breast tumor cells into the mammary fat pad of immunocompetent BALB/c mice. The exercise intervention (voluntary wheel running) was designed to mimic four clinically relevant scenarios: 1- patients who are sedentary before and after diagnosis, 2- previously sedentary patients who begin exercising after diagnosis, 3- previously active patients who stop exercising after diagnosis, and 4- previously active patients who continue to exercise after diagnosis. Animals in Groups 3 and 4 exercised prior to tumor cell transplant, whereas Groups 1 and 2 were sedentary during that time. Immediately after transplant, Groups 2 and 4 were running, and Groups 1 and 3 were sedentary. Tumor growth was monitored for 18 days, and then perfusion was mapped using MRI and tumors were removed for analysis. In a follow-up experiment, BALB/c mice were immediately implanted with tumor cells and then randomized to running or sedentary conditions with or without cyclophosphamide chemotherapy given one week after tumor transplant (three 100 mg/kg doses, every other day). Tumors were again allowed to progress for three weeks, and MRI was performed prior to tumor removal.

These findings have important implications for the use of exercise in cancer treatment. Using a clinically relevant animal model, we provide the first conclusive evidence that exercise may do more than decrease symptoms and improve quality of life for cancer patients. Our data suggest that exercise may, in fact, be an effective anti-tumor intervention both alone and in combination with other cytotoxic therapies.