Four Seasons after Haiku of Basho for Ensemble of Chinese Instruments and Spring Air and Winter Night for Dizi, Zheng and String Quartet 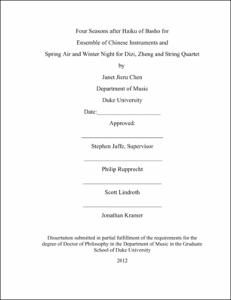 The composition is characterized by the application of Asian principles of heterophony and single tone timbre with the context of Western contemporary music. I explore for the first time the application of Chou Wen-chung's variable modes theory. In addition, Four Seasons are suggested by twelve I Ching hexagrams corresponding to the twelve months.

Each movement of Four Seasons features one soloist or small groups of soloists, as in concerto grosso. Setting up different instrumental combinations in four movements, the piece also uses timbre and sonority to depict the vivid colors of the four seasons.