Genetic Analysis of the Contribution of Ion Channels to "Drosophila" Nociception 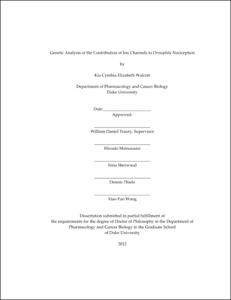 <p>Nociceptors are specialized primary sensory neurons that represent the first line of defense against potentially tissue damaging environmental stimuli, and are involved in pathological pain states caused by nerve damage, inflammation and many chronic diseases. In nociception, these neurons detect harmful stimuli and contribute to the reactions to avoid them. Nociceptors transduce noxious stimuli into membrane depolarization, which in turn, triggers action potentials. These action potentials are conducted to synapses in the central nervous system (CNS), resulting in release of neurotransmitters at the presynaptic terminal. The unifying factor in the progression of nociceptive signaling i.e. transduction, action potential propagation, and neurotransmitter release, is the contribution of ion channels.

<p>In this study, I use <italic>Drosophila melanogaster</italic> larvae as a model system to study the contribution of ion channels to nociception. Larvae stimulated with a noxious thermal or mechanical stimulus perform a stereotyped and quantifiable escape behavior. Larvae exhibiting this nocifensive behavior rotate around their long body axis in a corkscrew-like manner thus escaping the damage of the noxious stimulus. This behavior is triggered by the Class IV multidendritic (md) neurons, which are the main larval nociceptors. I describe here, the results of my systematic screen for ion channels required for larval thermal nociception. To perform this screen, I utilized RNAi to knock down the expression of 98% of the predicted ion channels in the <italic>Drosophila</italic> genome. I observed the effects of ion channel knockdown in the thermal nociception behavioral assay.

<p>In addition, I present detailed characterization of an ion channel that I found to be critical for inhibition of nociceptor excitability, the small conductance calcium-activated potassium channel, SK. This channel inhibits both thermal and mechanical nociception. Results of calcium imaging studies show enhanced excitability of larval nociceptors in <italic>SK</italic> mutant animals. My findings support a role for SK function at the sensory afferents, cell body, and axon.

<p>Another candidate ion channel gene, <italic>shadrach</italic>, encodes a Degenerin/Epithelial Na+ channel (DEG/ENaC) that I found to be required for thermal nociception. DEG/ENaCs are conserved in flies, nematodes, and several vertebrates including humans. These channels are expressed in a variety of tissues including kidney epithelia, muscle, and neurons. Members of this superfamily play a role in a host of biological processes including salt homeostasis, neurodegeneration, proprioception, touch transduction, and nociception. RNAi knockdown of <italic>shadrach</italic> results in increased thermal nociceptive threshold. Optogenetic experiments suggest that shadrach functions downstream of transduction.

<p>Furthermore, I identified seven ion channel genes in the thermal nociception screen, which affect nociceptor dendrite morphology. It is possible that thermal nociception behavioral phenotypes in these RNAi mutants are a consequence of the altered dendritic field. Reduction in segmental coverage by the nociceptors may influence the ability to detect noxious stimuli. Future research in our laboratory will establish the relationship between these ion channels, nociceptor development, and nociceptive behavioral output.

<p> <italic>Drosophila melanogaster</italic> is emerging as a powerful model for the study of pain signaling. I have uncovered several candidate ion channel genes that contribute to thermal nociception; of these, <italic>SK</italic> and <italic>shadrach</italic> are required for the response to noxious heat. I have shown that dendritic field coverage is important for the detection of noxious stimuli, and I have identified many candidate genes that are required for normal dendrite morphology.