PLEUROCARPOUS MOSSES IN SPACE AND TIME: BIOGEOGRAPHY AND EVOLUTION OF THE HOOKERIALES 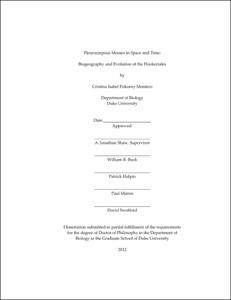 Morphological characters from the gametophyte and sporophyte generations have been used in land plants to infer relationships and construct classifications, but sporophytes provide the vast majority of data for the systematics of vascular plants. In bryophytes both generations are well developed and characters from both are commonly used to classify these organisms. However, because morphological traits of gametophytes and sporophytes can have different genetic bases and experience different selective pressures, taxonomic emphasis on one generation or the other may yield incongruent classifications. The moss order Hookeriales has a controversial taxonomic history because previous classifications have focused almost exclusively on either gametophytes or sporophytes. The Hookeriales provide a model for comparing morphological evolution in gametophytes and sporophytes, and its impact on alternative classification systems. Sometimes, placement of certain groups within Hookeriales remains challenging even at the molecular level. That is the case of the genus <italic>Calyptrochaeta</italic>. We study diversification dynamics in this genus to elucidate possible mechanisms obscuring its placement and we address biogeographic questions using the Tropical Conservatism scenario as our null hypothesis. Furthermore, to better understand biogeographic patterns in the Southern Hemisphere, infraspecific molecular patterns are compared in two species of the genus <italic>Calyptrochaeta</italic> (i.e., <italic>C. apiculata</italic> and <italic>C. asplenioides</italic>) and vicariance and recent long distance dispersal are tested to explain the disjunct distributions observed in these species.

In this study we reconstruct relationships among pleurocarpous mosses in or associated to the Hookeriales, in <italic>Calyptrochaeta</italic>, and within <italic>Calyptrochaeta</italic>. Six molecular markers are explored in total from all three genome compartments to reconstruct the evolution of morphological characters and habitat preferences in our phylogenies. Divergence times are estimated in a Bayesian framework using a relaxed molecular clock, and diversification rates are calculated on the chronograms resulting from these estimations.

As a result, we found that the Hookeriales, as currently circumscribed, are monophyletic and that both sporophyte and gametophyte characters are labile. We documented parallel changes and reversals in traits from both generations. We show that diversification rates in <italic>Calyptrochaeta</italic> have changed through its history. Also, though we lack support to clearly reject the tropical conservatism hypothesis, our data point to a more complex scenario where both temperate and tropical species can be ancient and give rise to one another, since shifts between tropical and temperate regions seem to be possible in any direction. Finally, we have show that recent long distance dispersal best explains the distribution of both <italic>C. apiculata</italic> and <italic>C. asplenioides</italic> in the Southern Hemisphere.