Ideological Segregation: Partisanship, Heterogeneity, and Polarization in the United States 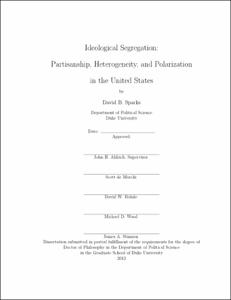 I develop and justify a measure of polarization based on pairwise differences between and within groups, which improves on previous approaches in its ability to account for multiple dimensions and an arbitrary number of partitions. I apply this measure to a roll-call based ideological mapping of U.S. legislators to show that while the contemporary Congress is polarized relative to mid-century levels, the current state is not historically unprecedented.

I then estimate the ideology of public opinion using survey respondent thermometer evaluations of political elites and population subgroups. I find that party affiliation is polarizing in this space, but that alternate partitions of the electorate, along racial, educational, and other socio-demographic lines, are de-polarized.

Finally, I estimate a two-dimensional latent space based on social identity trait co-occurrence. I show that positions in this space are predictive of survey respondent ideology, partisanship, and voting behavior. Further, I show that when conceived in this way, we do observe a polarization of the social space over the last half-century of American politics.