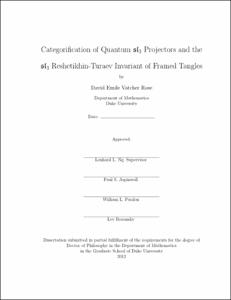 Quantum sl_3 projectors are morphisms in Kuperberg's sl_3 spider, a diagrammatically defined category equivalent to the full pivotal subcategory of the category of (type 1) finite-dimensional representations of the quantum group U_q (sl_3 ) generated by the defining representation, which correspond to projection onto (and then inclusion from) the highest weight irreducible summand. These morphisms are interesting from a topological viewpoint as they allow the combinatorial formulation of the sl_3 tangle invariant (in which tangle components are labelled by the defining representation) to be extended to a combinatorial formulation of the invariant in which components are labelled by arbitrary finite-dimensional irreducible representations. They also allow for a combinatorial description of the SU(3) Witten-Reshetikhin-Turaev 3-manifold invariant.

There exists a categorification of the sl_3 spider, due to Morrison and Nieh, which is the natural setting for Khovanov's sl_3 link homology theory and its extension to tangles. An obvious question is whether there exist objects in this categorification which categorify the sl_3 projectors.

In this dissertation, we show that there indeed exist such "categorified projectors," constructing them as the stable limit of the complexes assigned to k-twist torus braids (suitably shifted). These complexes satisfy categorified versions of the defining relations of the (decategorified) sl_3 projectors and map to them upon taking the Grothendieck group. We use these categorified projectors to extend sl_3 Khovanov homology to a homology theory for framed links with components labeled by arbitrary finite-dimensional irreducible representations of sl_3 .