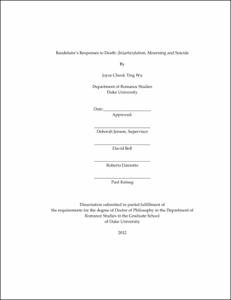 Although Charles Baudelaire's poetry was censored in part for his graphic representations of death, for Baudelaire himself, death was the ultimate censorship. He grappled with its limitations of the possibility of articulation in Les Fleurs du mal, Le Spleen de Paris, "Le Poème du hachisch," and other works. The first chapter of this dissertation, "Dead Silent," explores Baudelaire's use of apophasis as a rhetorical tactic to thwart the censoring force of death as what prevents the speaking subject from responding. Chapter two, "Voices Beyond the Grave," then investigates the opposite poetics of articulation and inarticulation, in the form of post-mortem voice from within the cemetery, and particularly as didactic speech that contradicts the living. "Baudelaire's Widows" argues that the widow is for Baudelaire a figure of modernity par excellence, auguring the anticipation of mourning and the problem of remembering the dead as a lifelong cognitive dilemma. Chapter four, "Lethal Illusions," combines analysis of suicide in "La Corde" and "Le Poème du hachisch" with interrogation of mimesis. If the intoxicant serves as suicide and mirror, the production of illusion is the possibility and the fatal pathology of art. Yet art simultaneously channels a truth understood as the revelation of illusions--not least the illusion of a life without death.