Disconsolate Subjects: Figures of Radical Alterity in the Twentieth Century Novel, From Modernism to Postcolonialism 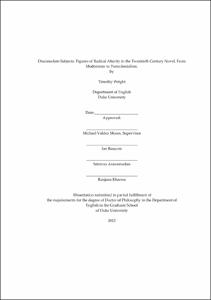 This dissertation focuses on a group of 20th and 21st century novelists writing in English - Samuel Beckett, J.M. Coetzee, and Kazuo Ishiguro - whose fiction is populated by figures of disconsolation: characters who resist, evade, or - in the case of Ishiguro's protagonists - assiduously attempt to conform to the constitutive social formations and disciplinary technologies of late modernity, among them, notably, the novel itself. These characters thus question the possibilities and limits of political critique and ethical life within a global modernity. I delineate a history of the disconsolate subject that cuts across the categories of modernist, postmodernist, and postcolonial literatures in order to reveal a different literary genealogy, in which an exilic postcoloniality becomes the paradigmatic sensibility for a global late modernist novel.

Georg Lukács argued that the transcendental homelessness of modernity is registered most emphatically in the novel, a form he imagined functioning as a surrogate home for rootless modern subjects. The tradition I describe, whose characters trouble the representational technologies of the novel, disrupts an easy identification with the textual realm as home. I borrow from the critic Neil Lazarus the notion of a vital modernist literary practice that persists after the death of modernism, "a writing...that resists the accommodation of what has been canonised as modernism and that does what at least some modernist work has done from the outset: namely, says `no,'; refuses integration, resolution, consolation, comfort; protests and criticises." This is a writing whose project, he suggests, following Adorno, is "disconsolation." With this in mind, I depart from the conception of an emergent cosmopolitan literature and examine instead a global literature of disconsolation, a literature that allegorizes a radically reconfigured global space whose subjects are no longer at home in the familiar world of nation-states.

A discontentment with the parameters of late modernity was already apparent in the high modernists, many of whom responded by embracing political positions on the radical right or left. However, the catastrophic political experiments of the century led to a sense that attempts to either refine or resist modernity had been exhausted. The works I examine mount critiques of such large-scale nationalist projects as the Irish Free State, the Japanese Empire, or apartheid South Africa - projects that emerged in opposition to a regnant world-system and saw themselves in utopian or liberatory terms. Yet these fictions are unable to affirm more than provisional or imaginary alternatives. A doubly exilic position consequently emerges in these novels, in which a rupture with the nation-state finds no compensation in another form of community such as a global cosmopolitan order. Through their attention to the gaps and fissures opened by the alterity of these disconsolate subjects, these texts function as waiting rooms or holding spaces for a utopianism that is unrealizable in a world of political disillusionment.