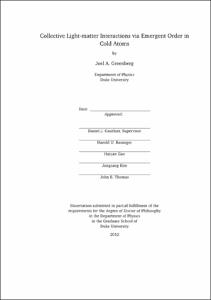 Collective behavior in many-body systems, where the dynamics of an individual element depend on the state of the entire ensemble, play an important role in both basic science research and applied technologies. Over the last twenty years, studies of such effects in cold atomic vapors have lead to breakthroughs in areas such as quantum information science and atomic and condensed matter physics. Nevertheless, in order to generate photon-mediated atom-atom coupling strengths that are large enough to produce collective behavior, these studies employ techniques that intrinsically limit their applicability. In this thesis, I describe a novel nonlinear optical process that enables me to overcome these limitations and realize a new regime of collective light-matter interaction.

My experiment involves an anisotropic cloud of cold rubidium atoms illuminated by a pair of counterpropagating optical (pump) fields propagating at an angle to the trap's long axis. When the pump beam intensities exceed a threshold value, a collective instability occurs in which new beams of light are generated spontaneously and counterpropagate along the trap's long axis. In order to understand the physical mechanism responsible for this behavior, I study first the system's nonlinear optical response when driven below the instability threshold. I find that the incident optical fields produce an optical lattice that causes the atoms to become spatially organized on the sub-wavelength length scale. This organization corresponds to the formation of an atomic density grating, which effectively couples the involved fields to one another and enables the transfer of energy between them. The loading of atoms into this grating is enhanced by my choice of field polarizations, which simultaneously results in cooling of the atoms from T~30 &mu;K to T~3 &mu;K via the Sisyphus effect. As a result, I observe a fifth-order nonlinear susceptibility &chi;^{(5)}=1.9x10^-12 (m/V)^4 that is 7 orders of magnitude larger than previously observed. In addition, because of the unique scaling of the resulting nonlinear response with material parameters, the magnitude of the nonlinearity can be large for small pump intensities (\ie, below the resonant electronic saturation intensity 1.6 mW/cm^2) while simultaneously suffering little linear absorption. I confirm my interpretation of the nonlinearity by developing a theoretical model that agrees quantitatively with my experimental observations with no free parameters.

The collective instability therefore corresponds to the situation where the cold vapor transitions spontaneously from a spatially-homogeneous state to an ordered one. This emergent organization leads to the simultaneous emission of new optical fields in a process that one can interpret either in terms of mirrorless parametric self-oscillation or superradiance. By mapping out the phase diagram for this transition, I find that the instability can occur for pump intensities as low as 1 mW/cm^2, which is approximately 50 times smaller than previous observations of similar phenomena. The intensity of the emitted light can be up to 20% of the pump beam intensity and depends superlinearly on the number of atoms, which is a clear signature of collective behavior. In addition, the generated light demonstrates temporal correlations between the counterpropagating modes of up to 0.987 and is nearly coherent over several hundred &mu;s. The most significant attributes of the light, though, are that it consists of multiple transverse spatial modes and persists in steady-state. This result represents the first observation of such dynamics, which have been shown theoretically to lead to a rich array of new phenomena and possible applications.