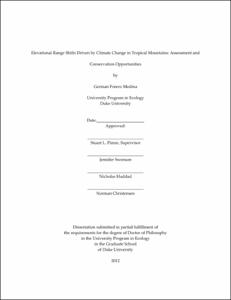 Global climate change can cause shifts in species distributions, and increases in some of their competitors, predators, and diseases that might even cause their extinction. Species may respond to a warming climate by moving to higher latitudes or elevations. Shifts in geographic ranges are common responses in temperate regions. For the tropics, latitudinal temperature gradients are shallow: the only escape for species may be to move to higher elevations. There are few data to suggest that they do, and our understanding of the process is still very limited. Yet, the greatest loss of species from climate disruption may be for tropical montane species. To better understand the potential process of elevational range shifts in the tropics and their implications we have to: 1) Build theoretical models for the process of range shifting, 2) Evaluate potential constraints that species could face while moving to higher elevations, 3) Obtain empirical evidence confirming the uphill shift of species ranges, 4) Determine the number of extinctions that could arise from elevational range shifts (mountain top extinctions) and 5) Identify vulnerable species and areas, and determine their representation by the Protected Areas Network. The purpose of this dissertation is to address these issues, by applying novel methods and collecting empirical evidence.

In the second chapter I incorporated temperature gradients and land-cover data from the current ranges of species in a model of range shifts in response to climate change. I tested 4 possible scenarios of amphibian movement on a tropical mountain and estimated the constraints to range shifts imposed by each scenario. Confirming the occurrence of elevational range shifts with empirical data is also essential, but requires historical data as a baseline for comparison. I repeated a historical transect in Peru, sampling birds at the same locations they were sampled 40 years ago, and compared their elevational ranges between sampling occasions to evaluate if they were moving uphill as a response to warming temperatures. Finally, based on the results from this comparison, I estimated the potential extinctions derived from elevational range shifts, using information on the species distribution, the topography and land cover within the ranges and surrounding areas. I evaluated the extent of mountain top extinctions for 172 bird species with restricted ranges in the northern Andes. I also considered how Colombia's protected Area Network represents species and sites that are vulnerable in the face of climate change.

In the comparison of bird distributions in the Cerrros del Sira, in Peru, I found an average upward shift of 49 m for 55 bird species over a 41 year interval. This shift is significantly upward, but also significantly smaller than the 152 m one expects from warming in the region. The range shifts in elevation were similar across different trophic guilds. Endothermy may provide birds with some flexibility to temperature changes and allow them to move less than expected. Instead of being directly dependent on temperature, birds may be responding to gradual changes in the nature of the habitat or availability of food resources, and presence of competitors. If so, this has important implications for estimates of mountaintop extinctions from climate change.

The estimated number of mountain top extinctions from climate disruption in the northern Andes is low, both the absolute number (5 species) and the relative number (less than 0.5% of Colombian land birds). According to future climate predictions these extinctions will not likely occur in this century. The extent of species loss in the Andes is not predicted by absolute mountaintop extinctions modeled by the kind of processes most other studies use. Rather, it is highly contingent -- the species will survive or not depending on how well we protect their much reduced ranges from the variety of other threats.