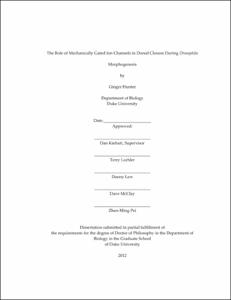 Physical forces play a key role in the morphogenesis of embryos. As cells and tissues change shape, grow, and migrate, they exert and respond to forces via mechanosensitive proteins and protein complexes. How the response to force is regulated is not completely understood.

Dorsal closure in Drosophila is a model system for studying cell sheet forces during morphogenesis. We demonstrate a role for mechanically gated ion channels (MGCs) in dorsal closure. Microinjection of GsMTx4 or GdCl3, inhibitors of MGCs, blocks closure in a dose-dependent manner. UV-mediated uncaging of intracellular Ca<super>2+</super> causes cell contraction whereas the reduction of extra- and intracellular Ca<super>2+</super> slows closure. Pharmacologically blocking MGCs leads to defects in force generation via failure of actomyosin structures during closure, and impairs the ability of tissues to regulate forces in response to laser microsurgery.

We identify three genes which encode candidate MGC subunits that play a role in dorsal closure, <italic>ripped pocket</italic>, <italic>dtrpA1</italic>, and <italic>nompC</italic>. We find that knockdown of these channels either singly or in combination leads to defects in force generation and cell shapes during closure.

Our results reveal a key role for MGCs in closure, and suggest a mechanism for the coordination of force producing cell behaviors across the embryo.