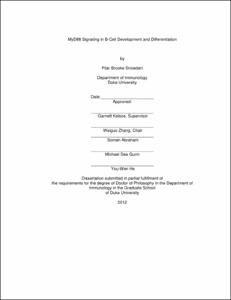 Toll-like receptor (TLR) signaling pathways have been demonstrated to be important in many aspects of innate and adaptive immunity. Binding of TLRs by their respective ligands initiates signaling cascades which promote a number of cellular responses including, but not limited to, pathogen recognition, co-stimulation, cell maturation and activation and initiation of adaptive immune responses. While many roles for TLRs have been rigorously tested, the exact contributions of these receptors to the quality of B-cell immune responses remain unclear. Specifically, a role for intracellular TLR signaling in B-cell development is one area that remains largely uncharacterized. Endogenous TLRs that recognize viral and microbial DNAs and RNAs are also capable of recognizing self-nucleic acids. B cells, which express TLRs, undergo tolerizing mechanisms in the bone marrow (BM) and periphery to eliminate self-reactive clones. I hypothesize that endogenous TLR recognition of self-nucleic acids during B cell development promotes the elimination of these autoreactive cells from the B cell repertoire.

Deficiency in the global adaptor protein for TLR signaling, myeloid differentiation primary response protein 88 (MyD88), through which all TLRs signal (with the exception of TLR 3), effectively silences the TLR pathway. Utilizing mice deficient in MyD88, I show that TLR signaling through MyD88 mediates central tolerance of B cells. Specifically, crossing the MyD88 deficiency onto a 3H9 autoreactive heavy-chain knock-in rescues the immature (imm) and transitional 1(T1) B cell compartments in the BM. This finding demonstrates the requirement for MyD88 signaling in the removal of autoreactive B cell clones at the first tolerance checkpoint.

I conclude that TLR signaling through MyD88 mediates tolerance during B cell development in the BM, but is not required for B cell immune responses.