Mechanisms by which p53 Regulates Radiation-induced Carcinogenesis and Myocardial Injury 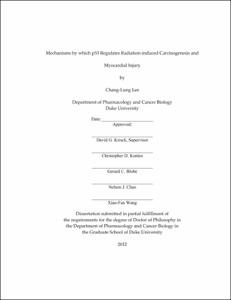 Radiation therapy can cause acute toxicity and long-term side effects in normal tissues. Because part of the acute toxicity of radiation is due to p53-mediated apoptosis, blocking p53 during irradiation can protect some normal tissues from acute radiation injury and might improve the therapeutic ratio of radiation therapy. However, the mechanisms by which p53 regulates late effects of radiation are not well understood. Here, I utilized genetically engineered mouse models to dissect the role of p53 in regulating two of the most clinically significant late effects of radiation: radiation-induced carcinogenesis and radiation-induced myocardial injury.

It has been well characterized that mice with one allele of p53 permanently deleted are sensitized to radiation-induced cancer. Therefore, temporary inhibition of blocking p53 during irradiation could promote malignant transformation. Experiments with mice lacking functional p53 in which p53 protein can be temporarily restored during total-body irradiation (TBI) suggest that the radiation-induced p53 response does not contribute to p53-mediated tumor suppression. Here, I performed reciprocal experiments and temporarily turned p53 off during TBI using transgenic mice with reversible RNA interference against p53. I found that temporary knockdown of p53 during TBI not only ameliorated acute hematopoietic toxicity, but in both Kras wild-type and tumor-prone KrasLA1 mice also prevented lymphoma development. Mechanistic studies show that p53 knockdown during TBI improves survival of hematopoietic stem and progenitor cells (HSPCs), which maintains HSPC quiescence and prevents accelerated repopulation of surviving cells. Moreover, using an in vivo competition assay I found that temporary knockdown of p53 during TBI maintains the fitness of p53 wild-type HSPCs to prevent the expansion of irradiated mutant cells. Taken together, our data demonstrate that p53 functions during TBI to promote lymphoma formation by facilitating the expansion of irradiated HSPCs with adaptive mutations.

p53 functions in the heart to promote myocardial injury after multiple types of stress, including ischemic injury, pressure overload and doxorubicin-induced oxidative stress. However, how p53 regulates radiation-induced myocardial injury, which develops after radiation therapy, is not well understood. Here, I utilized the Cre-loxP system to demonstrate that p53 functions in endothelial cells to protect mice from myocardial injury after a single dose of 12 Gy or 10 daily fractions of 3 Gy whole-heart irradiation (WHI). Mice in which both alleles of p53 are deleted in endothelial cells succumbed to heart failure after WHI due to myocardial necrosis, systolic dysfunction and cardiac hypertrophy. Moreover, the onset of cardiac dysfunction was preceded by alterations in myocardial vascular permeability and density. Mechanistic studies using primary cardiac endothelial cells (CECs) irradiated in vitro indicate that p53 signals to cause a mitotic arrest and protects CECs against radiation-induced mitotic catastrophe. Furthermore, mice lacking the cyclin-dependent kinase inhibitor p21, which is a transcriptional target of p53, are also sensitized to myocardial injury after 12 Gy WHI. Together, our results demonstrate that the p53/p21 axis functions to prevent radiation-induced myocardial injury in mice. Our findings raise the possibility that when combining radiation therapy with inhibitors of p53 or other components of the DNA damage response that regulate mitotic arrest, patients may experience increased radiation-related heart disease.

Taken together, our results demonstrate crucial but distinct roles of p53 in regulating late effects of radiation: p53-mediated apoptosis promotes radiation-induced lymphomagenesis, but p53-mediated cell cycle arrest prevents radiation-induced myocardial injury. These findings indicate that p53 may generally play a protective role from radiation, particularly at high doses, in cells where p53 activation is uncoupled from the induction of the intrinsic pathway of apoptosis. Therefore, selectively inhibiting p53-mediated apoptosis may be a promising approach to ameliorate acute radiation toxicity without exacerbating late effects of radiation.