Measurements of the Analyzing Power of Neutron-Helium-3 Elastic Scattering Between 1.60 and 5.54 MeV 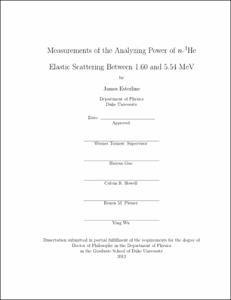 An experiment measuring the analyzing power Ay(&theta;) for neutron&ndash;helium-3 (<italic>n</italic>-<super>3</super>He) elastic scattering over broad angular distributions for a range of incident neutron energies from 1.60 to 5.54 MeV has been conducted at the Triangle Universities Nuclear Laboratory. These measurements represent an effort to resolve the long-standing discrepancy between experiment and theory in low-energy three-nucleon analyzing powers, through the evaluation of analyzing powers in the four-nucleon systems, which are expected to exhibit sensitivities not accessible with fewer nucleons. The present work is described in terms of the experimental setup and data reduction techniques; a comparison of the results with rigorous calculations using both nucleon-nucleon and, as recently has become available, three-nucleon potential models is presented. While a discrepancy between calculation and measurement was observed, at low energies substantially better agreement was achieved than in related measurements of the proton&ndash;helium-3 (<italic>p</italic>-<super>3</super>He) analyzing power, suggesting a sizeable dependence on isospin in the four-nucleon systems.