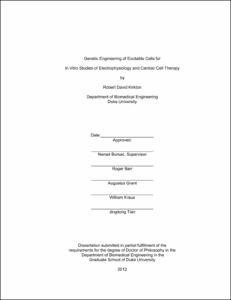 Disruption of coordinated impulse propagation in the heart as a result of fibrosis or myocardial infarction can create an asynchronous substrate with poor conduction and impaired contractility. This can ultimately lead to cardiac failure and make the heart more vulnerable to life-threatening arrhythmias and sudden cardiac death. The transplantation of exogenous cells into the diseased myocardium, "cardiac cell therapy," has been proposed as a treatment option to improve compromised cardiac function. Clinical trials of stem cell-based cardiac therapy have shown promising results, but also raised concerns about our inability to predict or control the fate of implanted cells and the electrical consequences of their interactions with host cardiomyocytes. Alternatively, genetically engineered somatic cells could be implanted to selectively and safely modify the cardiac electrical substrate, but their unexcitable nature makes them incapable of electrically repairing large conduction defects. The objective of this thesis was thus to develop a methodology to generate actively conducting excitable cells from an unexcitable somatic cell source and to demonstrate their utility for studies of basic electrophysiology and cardiac cell therapy.

First, based on the principles of cardiac action potential propagation, we applied genetic engineering techniques to convert human unexcitable cells (HEK-293) into an autonomous source of excitable and conducting cells by the stable forced expression of only three genes encoding an inward rectifier potassium (Kir2.1), a fast sodium (Nav1.5), and a gap junction (Cx43) channel. Systematic pharmacological and electrical pacing studies in these cells revealed the individual contributions of each expressed channel to action potential shape and propagation speed. Conduction slowing and instability of induced arrhythmic activity was shown to be governed by specific mechanisms of INa inhibition by TTX, lidocaine, or flecainide. Furthermore, expression of the Nav1.5 A1924T mutant sodium channel or Cav3.3 T-type calcium channel was utilized to study the specific roles of these channels in action potential conduction and demonstrate that genetic modifications of the engineered excitable cells in this platform allow quantitative correlations between single-cell patch clamp data and tissue-level function.

Lastly, we investigated how activation and repolarization gradients at the interface between cardiomyocytes and other excitable cells influence the vulnerability to conduction block. Microscopic optical mapping of action potential propagation was used to quantify dispersion of repolarization (DOR) in micropatterned heterocellular strands in which either well-coupled or poorly-coupled engineered excitable cells with a short action potential duration (APD), seamlessly interfaced with NRVMs that had a significantly longer APD. The resulting electrical gradients originating from the underlying heterogeneity in intercellular coupling and APD dispersion were further manipulated by the application of barium chloride (BaCl2) to selectively prolong APD in the engineered cells. We measured how the parameters of DOR affected the vulnerable time window (VW) of conduction block and found a strong linear correlation between the size of the repolarization gradient and VW. Reduction of DOR by BaCl2 significantly reduced VW and showed that VW correlated directly with dispersion height but not width. Conversely, at larger DOR, VW was inversely correlated with the dispersion width but independent of the dispersion height. In addition, despite their similar APDs, poorly-coupled excitable cells were found to significantly increase the maximum repolarization gradient and VW compared to well-coupled excitable cells, but only at larger DOR.

In summary, this thesis presents the novel concept of genetically engineering membrane excitability and impulse conduction in previously unexcitable somatic cells. This biosynthetic excitable cell platform is expected to enable studies of ion channel function in a reproducible tissue-level setting, promote the integration of theoretical and experimental studies of action potential propagation, and stimulate the development of novel gene and cell-based therapies for myocardial infarction and cardiac arrhythmias.