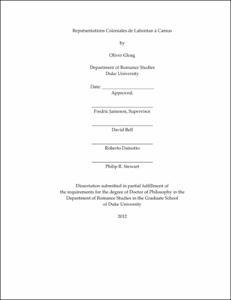 In my dissertation, I connect the role of literature and its interpretations with France's current occultation of its colonial and imperial past and present. The dissertation puts forth a re-consideration of an excluded work and of some hexagonal classics across time-periods.

The first chapter focuses on an excluded author from the Canon, The Baron de Lahontan (1683-1716). His Dialogues avec un sauvage (1703) are unique because the strident critique of the clergy, the wealthy and the aristocracy is free from patriotic and essentialist concerns. Today his works are claimed by some Amerindian scholars (such as George Sioui) as illustrative of Amerindian values, but largely ignored by French educational and publishing institutions. . I then examine briefly Diderot's Supplément au Voyage de Bougainville (1773). The comparison of Diderot's Supplément with Lahontan's Dialogues underline that Diderot critique of colonialism was not the primary objective of this work and was limited to issues of sovereignty and pointedly left aside the issue of commerce and indirect political influence.

The second chapter is on the work of Flaubert, Salammbô. I propose that Flaubert' Salammbô (1862) paints a world in which a collective consciousness based on class begins to emergeI also propose basing myself on Sartre's work on the author, that in Salammbô Flaubert finds a space in which to unfold his own contradictions (as symbolized in the novel by those of Salammbô herself) regarding his belonging to and hatred of the French bourgeoisie.

In the third chapter, I examine the works of Maupassant as a journalist and novelist in the context of colonialism. As a journalist he defended the interests of an emerging class of colons as a journalist by engaging in a complicated manipulation of public opinion. Maupassant was also the author of classic novel Bel-Ami (1885) which can be read as a ruthless indictment of the financial motivations behind France's colonial expansion. One of my arguments is that Maupassant's fiction in relation to the colonial renewal of the 1880's was what Balzac's novels were to emerging capitalism: his powers of observation transcend his political beliefs.

The ultimate chapter is about Camus's L'étranger (1942), Le premier home (written in 1959 published posthumously in1994) and his relation with Sartre. I examine how the historical events shaped Camus's fiction and how after his death they contributed to his standing in the literary field today. In L'étranger Camus does not acknowledge Arab characters by name, nor is the violence inflicted upon them considered neither central nor worthy of particular concern. I argue that Camus standing today as progressive and humanitarian thinker despite writing for the French colonial empire is indicative of France's inability to come to terms with its colonial past.

My re-visitation of the above works has led me examine the notion of progress in history and how its political corollary, the division between progress and reaction, later between left and right does not incorporate the issue of colonialism. I also attempted to assess the colonial and imperial projects as endeavors motivated primarily by economic gains of specific social groups which used race and identity as justifications and cover ups. This interpretative framework based on the theories put forth by Jean-Paul Sartre in his works on colonialism, racism and Flaubert.

This dissertation contributes a novel critique of hexagonal canonical works and proposes a re-evaluation of the extensive influence of political imperatives on the elaboration and status of works of literature.