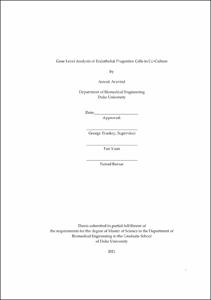 hCB-ECs show varying morphology under co-culture conditions. They are known to form networks when co-cultured on matrices like Matrigel, collagen gels and SMCs. Optimizing the co-culture model for the formation of networks can enable better understanding of angiogenesis and can aid in the area of tissue engineered organs while creating a model with no networks can help in producing a smooth layer of cells for tissue engineered blood vessels. Additionally, the study of networks on smooth muscle cell surfaces gives a better approach to understanding the in vivo phenomena.

The main goal of this study was to identify conditions that would support the formation of networks and to study the gene level alterations in the hCB-EC cells between co-culture and monoculture during the formation and absence of networks. To study the morphological changes co-cultures were setup by varying the hCB-EC densities at 26,316 cells/cm2, 52,632 cells/cm2, 80,000 cells/cm2 and 105,263 cells/cm2 on SMCs. Lower seeding densities of hCB-ECs led to network formations while a confluent layer was observed at the highest density. Medium components were altered to identify factors which contributed to network formation and it was found that absence of VEGF led to delayed cell migration and network formation while absence of heparin produced sparser networks in co-culture. Microarray analysis using four different hCB-EC sources plated at the highest and lowest densities resulted in higher expression of ECM remodeling and endothelial cell migration genes consistent to the low density conditions were networks were abundant while high density conditions expressed downregulation of cell cycle associated genes.