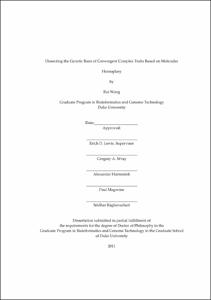 The goal of my thesis is to understand the genetics of a complex behavioral trait, vocal learning, which serves as a critical substrate for human spoken language. With the available genomes of 23 mammals, I developed a novel approach based on molecular homoplasy to reveal Single Non-random Amino Acids Patterns (SNAAPs) that are associated with convergent traits, a task that proved intractable for standard approaches, e.g. dN/dS analyses. Of 73 genes I identified in mammalian vocal learners, ~25% function in neural connectivity, auditory or speech processing. Remarkably, these include a group of 6 genes from the ROBO1 axon guidance pathway. In birds, I found ROBO1 and its ligand SLIT1 show convergent differential expression in the motor output song nucleus of the three independent lineages of vocal learners but not in analogous brain areas of vocal non-learners, and ROBO1 is developmentally regulated during song learning critical periods in songbirds. In a different set of genes, I came across an unexpected discovery of the excess sharing of homoplastic substitutions in humans and domesticated species. I revealed biased nucleotide transitions (mostly favoring A/G mutation) for above amino acid substitutions and found that this rule was significantly relaxed during domestication for artificial selection. Overall, my thesis has resulted in a novel approach for studying convergent complex traits and provided critical insights into the evolution of vocal learning specifically, and complex traits generally.