Roles for UNC-6/Netrin Signaling During Cell Invasion in C. Elegans 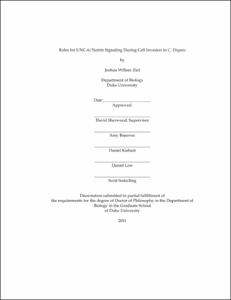 Basement membranes are dense, sheet-like forms of extracellular matrix that

surround the epithelial tissues of metazoan organisms. While these structures are

formidable barriers to most cells. However, certain specialized cells are able to breach

these barriers and move between tissues. Acquisition of cell invasive behavior by some

tumor cells is thought be an important step in cancer progression. Due to the clear basic

and clinical importance of understanding the mechanisms underlying cell invasion

through basement membranes, cell invasive behaviors has been an area of intense study.

the nematode worm, C. elegans. In this system a single proto-epithelial cell remodels

basement membrane to connect two epithelial tissues, the uterus and vulva. Using this