An Evolutionary Theory of Democracy: Dynamic Evolutionary Models of American Party Competition with an Empirical Application to the Case of Abortion Policy from 1972-2010 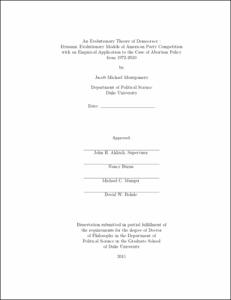 Chapter 2 presents several single-party models that focus on explaining the conditions that must hold for parties to emerge as populations in an evolutionary sense. I show that only when candidates experience common selection pressures will population dynamics arise.

In Chapter 4, I extend the model to a multi-dimensional setting. Previous theoretical work on multi-dimensional party dynamics has been divided between (1) analytical models that provide stable equilibria results and (2) qualitative theories that seek to explain the dynamic process of party change. In this chapter, I present a formalized model that makes precise predictions regarding both the environmental conditions that lead to locally stable policy positions and the dynamic process that occurs as the parties drift from one stable configuration to another in response to changing environmental conditions.

Finally, in Chapter 5, I apply my model to the case of abortion policy in the United States from 1972-2010. Using data from public opinion surveys and Congressional roll-call votes, I show that party polarization on abortion was driven by changing activist preferences and that this shift occurred almost entirely as the result of incumbent replacement. These results support my ecological party model and demonstrate its ability to account for the kinds of gradual party movements -- driven by incumbent replacement -- that characterize many important historical shifts in party platforms.