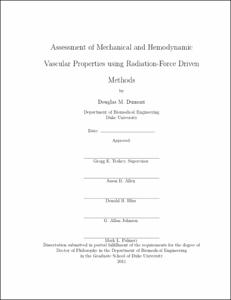 force (ARF) elasticity methods to estimate the mechanical and material

properties of plaque. However, recent evidence suggests that cardiovascular disease

(CVD), in addition to involving pathological changes in arterial tissue, is also a

hemodynamic remodeling problem. As a result, integrating techniques that can

elastography methods may provide a more complete assessment of CVD.

for integrating B-mode, color-flow Doppler, and ARFI imaging were developed

(BACD imaging), validated in tissue-mimicking phantoms, and demonstrated for in

vivo imaging. The resulting system allows for the real-time acquisition (< 20 Hz) of

and scan-duration configurations. The results suggest that BACD images can be acquired

five seconds, while staying beneath suggested limits for tissue and transducer surface

Because plaque-burden is potentially a 3D problem, techniques were developed

using a stage-controlled, freehand scanning approach. The results suggest that a

to ARFI imaging applications. Results suggest that both jitter and SNR degrade

with increased sweep velocity, and that degradation is worse when imaging stiffer

materials. The results also suggest that a transition between shearing-dominated

stiffer materials. These artifacts can be reduced with simple, linear filters. Results

and flow area, both important tasks for CVD imaging, are only minimally affected

As a result, novel imaging approaches (SAD-SWEI, SAD-GATED) were developed

techniques to allow for the combined assessment of cross-luminal velocity profiles,

between previously described ARF-techniques and theory. Initial in vivo feasibility

was then evaluated in five human volunteers. Results show that a cyclic

with previous ultrasonic-based assessments of these metrics. In vivo ARFI and Bmode/

of vascular hemodynamics and elasticity. However, continued investigation

dependency of the SAD-SWEI/SAD-GATED methods, and decreasing processing

time will help improve the clinical viability of the proposed imaging techniques.