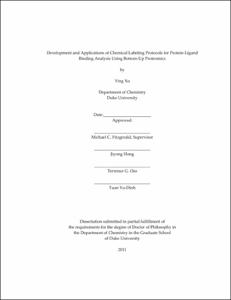 Proteins fold into well-defined three-dimensional structures to carry out their biological functions which involve non-covalent interactions with other cellular molecules. Knowledge about the thermodynamic properties of proteins and protein-ligand complexes is essential for answering fundamental biological questions and drug or biomarker discovery. Recently, chemical labeling strategies have been combined with mass spectrometry methods to generate thermodynamic information about protein folding and ligand binding interactions. The work in this thesis is focused on the development and application of two such chemical labeling protocols coupled with mass spectrometry including one termed, SUPREX (stability of unpurified proteins from rates of H/D exchange), and one termed SPROX (stability of proteins from rates of oxidation). The work described in this thesis is divided into two parts. The first part involves the application of SUPREX to the thermodynamic analysis of a protein folding chaperone, Hsp33, and its interaction with unfolded protein substrates. The second part involves the development of a new chemical labeling protocol that can be used to make protein folding and ligand binding measurements on the proteomic scale.

In the first part of this work, the SUPREX technique was used to study the binding interaction between the molecular chaperone Hsp33 and four different unfolded protein substrates including citrate synthase, lactate dehydrogenase, malate dehydrogenase, and aldolase. The results of the studies, which were performed at the intact protein level, suggest that the cooperativity of the Hsp33 folding/unfolding reaction increases upon binding with denatured protein substrates. This is consistent with the burial of significant hydrophobic surface area in Hsp33 when it interacts with its substrate proteins. The SUPREX derived Kd-values for Hsp33 complexes with four different substrates were also found to be all within a range of 3-300 nM. The interaction between Hsp33 and one of its substrates, citrate synthase (CS), was characterized at a higher structural resolution by using the SUPREX technique in combination with a protease digestion protocol. Using this protocol, the thermodynamic properties for both Hsp33 and CS were evaluated at different stages of binding, including reduced Hsp33 (inactive form), oxidized Hsp33 (active form), followed by native CS and finally of Hsp33ox -CS complexes before and after reduction with DTT. The results suggest that Hsp33 binds unfolded proteins that still have a significant amount of residual higher- order structure. Structural rearrangements of the substrate protein appear to occur upon reduction of the Hsp33-substrate complexes, which may facilitate the transfer of the substrate protein to other protein folding chaperone systems.

In the second part of this dissertation, a mass spectrometry-based covalent labeling protocol, which relies on the amidination rate of globally protected protein amine groups, was designed and applied to the thermodynamic analysis of several eight protein samples including: six purified proteins (ubiquitin, BCAII, RNaseA, 4OT, and lysozyme with, and without GlcNAc), a five-protein mixture comprised of ubiquitin, BCAII, RNaseA, Cytochome C, and lysozyme, and a yeast cell lysate. The results demonstrate that in ideal cases the folding free energies of proteins and the dissociation constants of protein-ligand complexes can be accurately evaluated using the protocol. Also demonstrated is the new method's compatibility with three different mass spectrometry-based readouts including an intact protein readout using MALDI, a gel-based proteomics readout using MALDI, and an LC-MS-based proteomics readout using isobaric mass tags. The results of the cell lysate sample analysis highlight the complementarity of the labeling protocol to other chemical modification strategies that have been recently developed to make thermodynamic measurements of protein folding and stability on the proteomic scale.