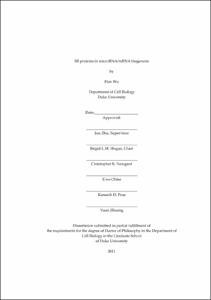 SR proteins are a family of splicing factors involved in the regulation of both constitutive and alternative splicing of pre-mRNAs. Despite years of studies, several big questions still remain: how the expression levels of SR proteins are regulated; what are the underlying mechanisms responsible for SR proteins-mediated gene regulation; what are the physiological targets of SR proteins in vivo. In my dissertation study, I am focusing on two members of the family, SF2/ASF and SRp20, to study their functional involvement in regulating microRNA/mRNA biogenesis and their own expression.

Negative feedback regulation is a common mechanism maintaining the steady-state level of SR proteins (i.e. SC35 and SRp20), and several mechanism may be involved. In order to test if miRNAs are also involved in such negative feedbacks, small RNA sequencing was used to identify differentially expressed miRNAs after SF2/ASF overexpression in an inducible stable cell line system. Among the 40 differentially expressed miRNAs, miR-7 is particularly interesting, because it is also predicted to target SF2/ASF, which forms a negative feedback regulation. This is indeed the case as shown by luciferase reporter assay and overexpression/knocking down of miR-7 in vivo. To our knowledge, this is the first identified negative feedback circuit between a SR protein and a miRNA, which may be a general mechanism in regulating SR protein homeostasis.

To characterize the mechanism underlying SF2/ASF-enhanced miRNA biogenesis, I have employed a series of molecular and biochemical approaches to pinpoint the key molecular interactions in a minigene system, which is consist of miR-7 embedded intron and the flanking exons of its host gene. By manipulating the splicing pattern of such minigene, I have uncovered a splicing-independent function of SF2/ASF in regulating miRNA biogenesis. Directly binding between SF2/ASF protein and pri-miR-7 was demonstrated by Cross-linking and immunoprecipitation assay (CLIP) and RNA affinity purification. The precise binding site was then pinpointed by combining computational prediction and mutagenesis assay. Finally, by using in vitro pri-miRNA processing assay, I showed that SF2/ASF can promote the Drosha cleavage step of pri-miR-7 through directly association with the predicted binding site. So far, this is the first SR protein discovered, which is directly involved in miRNA biogenesis. Moreover, our preliminary data also suggested that SF2/ASF may promote miRNA biogenesis in other steps after Drosha cleavage; and different SR proteins can regulate miRNA biogenesis in a substrate-specific manner. Taken together, SR family of splicing factors may be broadly involved in miRNA biogenesis through direct interactions.

In order to study the general involvement of SR proteins in RNA biogenesis, one important step stone is to have a better profile of their targets in vivo. To achieve this, I focused on SRp20, another classic SR protein. Photoactivatable-Ribonucleoside-Enhanced Cross-linking and immunoprecipitation assay combined with deep sequencing (PAR-CLIP-seq) was used to identify the binding partners of SRp20 globally, which is subsidized by candidate gene validations. Consistent with the literature, I found that SRp20 primarily targets exonic regions for splicing regulation, and such interactions are likely to be sequence dependent on the CWWCW motif. Surprisingly, I also observed extensive binding between SRp20 and the 3' UTRs of mRNA, which may affect the choice of alternative polyadenylation sites. The underlying mechanisms are being investigated by a variety of molecular methods.

In summary, I have identified a subset of miRNAs, the expression of which can be regulated by SF2/ASF in a splicing independent manner. This is the first SR protein identified in regulating miRNA biogenesis. One of the upregulated miRNAs, miRNA-7 can form a negative feedback with SF2/ASF by negatively regulating the expression of SF2/ASF on translational level. By using PAR-CLIP method, I have identified the genome-wide binding partners of SRp20 in vivo. When SRp20 binds to the exonic regions, it potentially affects the alternative splicing patterns of nearby introns. Interestingly, the 3' end choices for a subset of genes may be regulated by SRp20 through directly binding, which may be a new mechanism for the regulation of 3' end processing.