Both Citizen and Saint: Religious Integrity and Liberal Democracy 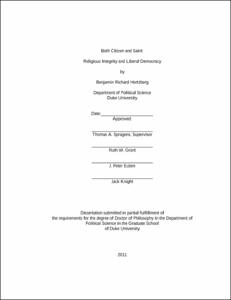 In this dissertation, I develop a political liberal ethics of citizenship that reconciles conflicting religious and civic obligations concerning political participation and deliberation--a liberal-democratic ethics of citizenship that is compatible with religious integrity. I begin by canvassing the current state of the debate between political liberals and their religious critics, engaging Rawls's Political Liberalism and the various religious objections Nicholas Wolterstorff, Christopher Eberle, Robert George, John Finnis, Paul Weithman, Jeffrey Stout, and Gerald Gaus and Kevin Vallier develop (Chapter One). I then critically evaluate political liberalism's requirements of citizens in light of the religious objections and the religious objections in light of political liberal norms of reciprocity, concluding that some religious citizens have legitimate complaints against citizenship requirements that forbid citizens from offering religious arguments alone in public political discussions (Chapter Two). Next, I propose an alternative set of guidelines for public political discussions in constitutional democracies, the phased account of democratic decision-making, that, I argue, addresses the religious citizens' legitimate complaints without undermining a constitutional democracy's legitimacy or commitment to public justification (Chapter Three). Then, I argue that a religious practice of political engagement I call prophetic witnessing is compatible with the phased account, can serve as a canonical model to guide religious citizens' political participation, and can help religious citizens navigate the substantive conflicts between their religious and civic obligations that remain possible even in a society that follows the phased account (Chapter Four). Finally, I conclude by imagining three different democracies, each adhering to a different set of guidelines for public political discussions, in order to argue for the benefit of adopting norms that balance citizens' obligations to govern themselves legitimately with citizens' ability to integrate their deepest moral and religious commitments and their public, political argument and advocacy.