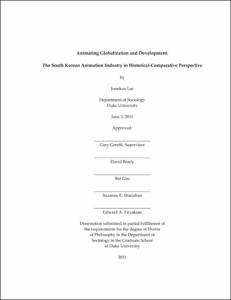 Over the last decades, the global flow of cultural goods and services has significantly grown as a result of liberalized international trade and investment and technological advance. Global cultural production is now flexibly organized and decentralized as more tasks are outsourced into different parts of the world. Yet, the question of how globalization has affected the structure of global cultural industries and upgrading dynamics has not been taken seriously.

This study takes up this question by examining the animation industry in South Korea ("Korea" hereafter) and its changing relationship with global animation production from an historical-comparative perspective from the mid-1960s to the late 2000s. This study attempts to answer several main questions: 1) How did two waves of globalization differently reshape the structure the global animation industry? 2) What are the major characteristics of the Korean animation industry at different stages? 3) How did the differences between U.S. and Japanese outsourcing chains and international coproduction chains affect the upgrading outcomes of Korean suppliers? and 4) Has the Korean state's developmental role been declined, preserved, or reconfigured over time?

Based upon secondary literature and the author's field interviews in Korea, India and Japan in 2008 and 2009, this study finds that the animation industry has been globalized over the last four decades with two distinctive waves of globalization. The first wave until the 1980s involved the rise of offshore outsourcing networks linking the U.S. market to East Asian suppliers. The second wave beginning in the 1990s has restructured the industry through the consolidation and global expansion of media conglomerates, the relocation of offshore outsourcing, and the growth of animation production and consumption in emerging economies.

Throughout the period, the Korean animation industry has undergone three distinctive phases in terms of its development patterns. The development path has been constructed by the interaction of global linkages and local dynamics. The first phase leading up to the mid-1980s is characterized by a gradual integration to global production networks through small-scale processing. The ensuring large-scale, outsourcing-based export growth defines the second phase up until the end of the 1990s. The latest phase is the outcome of a new path in the late 1990s toward upgrading based on local production and international coproduction.

The disaggregation of global forces at the global value chain (GVC) level shows marked differences between U.S. and Japanese outsourcing chains in terms of chain structure, division of labor, firm characteristics, and chain governance. These differences generated distinctive upgrading patterns among two segmented local supplier groups. A quick build-up of large-scale production by consolidated suppliers in the U.S. chains (yet their equally quick decline later) contrasts to a slower pace of upgrading by a large group of fragmented suppliers in Japanese chains. While the structure of emerging international coproduction chains varies by project, power relations between the partner firms are critical to determine the gains captured.

Finally, as for the role of the state, the finding of this study supports the reconfiguration argument that the developmental state, at least in Korea, is not in eclipse but bolstered with a new mode of state intervention and developmental alliance. In the face of growing competitiveness pressure on Korean firms at home and abroad, state-led, export-oriented development strategies have been rather strengthened and extended. Sector-specific industrial policy has increased, not decreased, particularly after the economic crisis of the late 1990s. Industrial policy has been narrowed onto the sector level and strategically engaged in specific chain nodes within the sector. Organizationally, this policy reform was supported by a newly-minted developmental alliance based on original animation exports and the re-embedding of the state onto specialized supportive agencies and new policy constituencies.

These findings are compared and contrasted to the experience of the Indian animation industry to draw implications for upgrading in the global cultural economy, which include: a) globalization as a differentiating and restructuring process; b) the interaction between global integration and local production; c) linkages between local, regional and global markets; and d) value chain-based state intervention.