The Beginning of the End: The Eschatology of Genesis 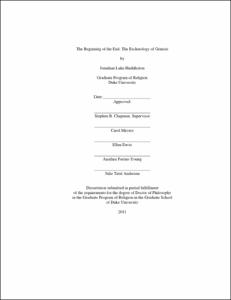 This dissertation examines the book of Genesis as a functioning literary whole, orienting

post-exilic Persian-era Judeans toward their ideal future expectations. While many have

hopes for an eschatological restoration. Employing a speech-act linguistic semiotics, this study

its Persian-era users. Promises made throughout Genesis apply not only to the characters of

traditional memory, but also to those who preserved/ composed/ received the text of Genesis.

populated, Persian-ruled Judea imagines its mythic destiny as a great nation exemplifying (and

spreading) blessing among the families of the earth, dominating central Palestine in a new pan-

Israelite unity with neighboring Samaria and expanding both territory and population.

traditions typologically to point to Israel's future hope. Taken together, Genesis and the prophetic

corpus identify Israel as a precious seed, carrying forward promises of a yet-to-be-realized

creation fruitfulness and blessing. Those who used this literature identify their disappointments

extinguish the line of promise. The dynamic processes of Genesis' usage (its composition

stretching back to the pre-exilic period, and its reception stretching forward to the post-Persian

era) have made Genesis an etiology of Israel's expected future--not of its static present. Because

this future will be fully realized only in the coming divine visitation, Genesis cannot be attributed

Judean synthesis which produced the restoration eschatology of the prophetic corpus. This

account of Genesis contributes to a canonical understanding of Second Temple Hebrew literature;

identity, founded on trust in a divinely promised future.