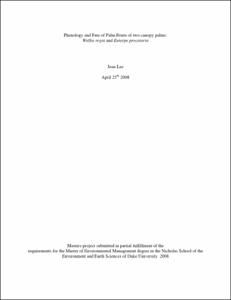 View / Download
424.5 Kb
Date
Author
Lee, Jean
Advisors
Bynum, Nora
Richter, Daniel
Repository Usage Stats
428
views
323
downloads
Abstract
The CICLOS project, located at La Selva Biogical Research Station in Costa Rica, attempts to document the effects of ENSO on tree growth and builds upon past studies at La Selva, integrating studies of stand dynamics, forest carbon and nutrient cycling, and the hydrological cycle. This study adds a finer microscale understanding of the role of canopy palm fruits in the carbon cycle. The principal objective was to determine the fate of palm fruits (removal versus insect predation versus simple fruitfall) throughout the maturation process. Secondary objectives were to characterize the nutrient content of fruitfall associated with fruiting individuals and in two different overall fertility contexts and to describe fruitfall over time as related to methods used to estimate total crop size of immature and mature fruits. Sixteen canopy palms representing eight individuals each from two species—Welfia regia and Euterpe precatoria—were selected for phenological observations. During this time period, I quantified the fruitfall as well as categorized the condition of the fruits that fell from the trees, creating categories such as exocarp, mature, immature, partially eaten, aborted, or seed. Assuming fruit fell within a 1.5m radius from the bole, the total weight of fruitfall over the span of six weeks was 1682 g and 451g for Welfia and Euterpe, respectively. We found that on average 9.95 Euterpe fruits and 5.7 Welfia fruits fell per week per square meter. The mean crop size for Euterpe was 3208, with a mean maximum crop size of 6010. The mean crop size for Welfia was 1350, with a mean maximum crop size of 1936. We found that Euterpe fruitfall had higher proportions of aborted or immature fruit than Welfia. 25% of Euterpe’s fruit and 10% of Welfia’s fruit were partially open, indicating consumption of fruits as food resources. We estimated that on average 86% and 62% of the fruits were removed from Euterpe and Welfia, respectively. Our results showed that it was not possible to predict fruitfall from the estimated crop sizes. Analyses of the effect of fertility levels show that phosphorus levels in soils positively affect Euterpe crop sizes. Our study demonstrates the greater need to understand the natural history of fruitfall as well as fruit removal of the system in order to better quantify and qualify the role of canopy palm fruits in the carbon cycle.
Type
Master's project
Department
Nicholas School of the Environment and Earth Sciences
Subject
CICLOS
phenology
fruitfall
La Selva
carbon cycle
Permalink
https://hdl.handle.net/10161/566
Citation
Lee, Jean (2008). Phenology and Fate of Palm Fruits of two canopy palms:Welfia regia and Euterpe precatoria. Master's project, Duke University. Retrieved from https://hdl.handle.net/10161/566.
Collections
More Info
Show full item record