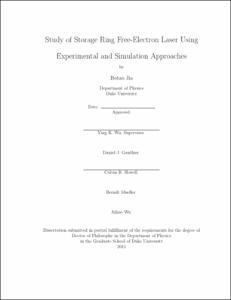 The Duke electron storage ring, first commissioned in November of 1994, has been developed as a dedicated driver for storage ring free-electron lasers (SRFELs) operating in a wide wavelength range from infrared, to visible, to ultraviolet (UV) and vacuum ultraviolet (VUV). The storage ring has a long straight section for various insertion devices and can be operated in a wide energy range (0.25 GeV to 1.15 GeV).

Commissioned in 1995, the first free-electron laser (FEL) on the Duke storage ring was the OK-4 FEL, an optical klystron with two planar undulators sandwiching a buncher magnet. In 2005, the OK-5 FEL with two helical undulators was commissioned. Operating four undulators -- two OK-4 and two OK-5 undulators, the world's first distributed optical klystron FEL was brought to operation in 2005. Via Compton scattering of FEL photons and electrons in the storage ring, the Duke FEL drives the world's most powerful, nearly monochromatic, and polarized Compton

gamma-ray source, the High Intensity Gamma-ray Source (HI&#947;S). Today, a variety of configurations of the storage ring FELs at Duke have been used in a wide range of research areas from nuclear physics to biophysics, from chemical and medical research to industrial applications.

The capability of accurately measuring the storage ring electron beam energy spread is crucial for understanding the longitudinal beam dynamics and the dynamics of the storage ring FEL. In this dissertation, we have successfully developed a noninvasive, versatile, and accurate method to measure the energy spread using optical klystron radiation. Novel numerical methods based upon the Gauss-Hermite expansion have been developed to treat both spectral broadening and modulation on an equal footing. Through properly configuring the optical klystron, this energy spread measurement method has a large dynamic range. In addition, a model-based scheme has been developed for correcting the electron beam emittance related inhomogeneous spectral broadening effect, to further enhance the accuracy of measuring the electron beam energy spread.

Taking advantage of the direct measurement method of the electron beam energy spread, we have developed another novel technique to simultaneously measure the FEL power, electron beam energy spread, and other beam parameters. This allowed us to study the FEL power in a systematic manner for the first time. Based on the experimental findings and results of the theoretical predictions, we have proposed a compact formula to predict the FEL power using only the knowledge of electron

As part of the dissertation work, we have developed a self-consistent numerical model to study the storage ring FEL. The simulation program models the electron beam propagation along the storage ring, multi-turn FEL interaction in the undulators, gradual intra-cavity optical power buildup, etc. This simulation code captures the main features of a storage ring FEL at different time and space scales. The simulated FEL gain has been benchmarked against measured gain and calculated

gain with good agreement. The simulation package can provide comprehensive information about the FEL gain, optical pulse growth, electron beam properties, etc. In the near future, we plan to further improve the simulation model, by including additional physics effects such as microwave instability, to make it a more useful tool for FEL research.