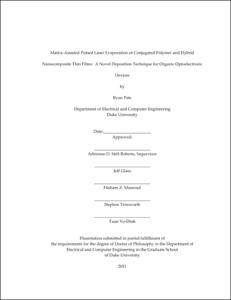 This dissertation develops a novel application of the resonant-infrared matrix-assisted pulsed laser evaporation (RIR-MAPLE) technique toward the end goal of conjugated-polymer-based optoelectronic device fabrication. Conjugated polymers are attractive materials that are being investigated in the development of efficient optoelectronic devices due to their inexpensive material costs. Moreover, they can easily be combined with inorganic nanomaterials, such as colloidal quantum dots (CQDs), so as to realize hybrid nanocomposite-based optoelectronic devices with tunable optoelectronic characteristics and enhanced desirable features. One of the most significant challenges to the realization of optimal conjugated polymer-CQD hybrid nanocomposite-based optoelectronics has been the processes by which these materials are deposited as thin films, that is, conjugated polymer thin film processing techniques lack sufficient control so as to maintain preferred optoelectronic device behavior. More specifically, conjugated-polymer-based optoelectronics device operation and efficiency are a function of several attributes, including surface film morphology, internal polymer chain morphology, and the distribution and type of nanomaterials in the film bulk. Typical conjugated-polymer thin-film fabrication methodologies involve solution-based deposition, and the presence of the solvent has a deleterious impact, resulting in films with poor charge transport properties and subsequently poor device efficiencies. In addition, many next-generation conjugated polymer-based optoelectronics will require multi-layer device architectures, which can be difficult to achieve using traditional solution processing techniques. These issues direct the need for the development of a new polymer thin film processing technique that is less susceptible to solvent-related polymer chain morphology problems and is more capable of achieving better controlled nanocomposite thin films and multi-layer heterostructures comprising a wide range of materials. Therefore, this dissertation describes the development of a new variety of RIR-MAPLE that uses a unique target emulsion technique to address the aforementioned challenges.

The emulsion-based RIR-MAPLE technique was first developed for the controlled deposition of the conjugated polymers poly[2-methoxy-5-(2'-ethyl-hexyloxy)-1,4-phenylene vinylene] (MEH-PPV) and poly[2-methoxy-5-(2'ethylhexyloxy)-1,4-(1-cyanovinylene) phenylene] (MEH-CN-PPV) into homogenous thin films. Therein, it was identified that target composition had the most significant influence on film surface morphology, and by tuning the concentration of hydroxyl bonds in the target bulk, the laser-target absorption depth could be tuned so as to yield more or less evaporative deposition, resulting in films with tunable surface morphologies and optical behaviors.

Next, the internal morphologies of emulsion-based RIR-MAPLE-deposited MEH-PPV thin films were investigated by measuring their hole drift mobilities using the time-of-flight (TOF) photoconductivity method in the context of amorphous materials disorder models (Bässler's Gaussian Disorder model and the Correlated Disorder model) in order to provide a quantitative measure of polymer chain packing. The polymer chain packing of the RIR-MAPLE-deposited films was demonstrated to be superior and more conducive to charge transport in comparison to spin-cast and drop-cast MEH-PPV films, yielding enhanced hole mobilities.

The emulsion-based RIR-MAPLE technique was also developed for the deposition of different classes of inorganic nanoparticles, namely un-encapsulated nanoparticles and ligand-encapsulated nanoparticles. These different classes of nanoparticles were identified to have different film growth regimes, such that either rough or smooth films were obtained, respectively. The ligand-encapsulated nanoparticles were then co-deposited with MEH-PPV as conjugated polymer-CQD hybrid nanocomposites, wherein the distributions of the constituent materials in the film bulk were identified to be tunable, from homogeneous to highly clustered. The RIR-MAPLE deposition regime determined the said distributions, that is, if the polymer and CQDs were sequentially deposited from a sectioned target or simultaneously deposited from a single target, respectively. The homogeneous conjugated polymer-CQD nanocomposites were also investigated in terms of their charge transport properties using the TOF photoconductivity technique, where it was identified that despite the enhanced dispersion of CQDs in the film bulk, the presence of a high concentration of CQDs degraded hole drift mobility, which indicates that special considerations must be taken when incorporating CQDs into conjugated-polymer-based nanocomposite optoelectronics.