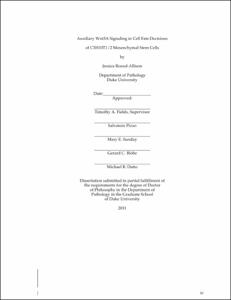 Activation of Wnt signaling pathways is critical to a variety of developmental events across all animal taxa. These highly evolutionarily conserved pathways are also important in the adult organism for maintaining homeostasis of self-renewing tissues. Because of its role in such important physiological processes, deregulation of Wnt signaling can have severe consequences; indeed, inappropriate activation of this pathway has been implicated in multiple human diseases, including cancer.

Expression microarray analysis and biochemical and pharmacological techniques were used to further characterize the two Wnt3A-stimulated auxiliary pathways in C3H10T1/2 cells. Remarkably, each pathway influences &#946;catenin function via a novel mechanism. In the Wnt3A/RhoA pathway, Wnt3A-stimulated trimeric G proteins activate a RhoA-ROCK-SRF cascade. Activated SRF can cooperate with &#946;catenin to enhance the induction of Wnt3A target genes, like Ctgf, that also contain SRF binding sites within regulatory elements. In the Wnt3A/ERK pathway, Wnt3A transactivates the EGFR in a concentration-dependent manner, leading ultimately to ERK activation, which interacts with and promotes &#946;catenin/Tcf4 interaction and enhances induction of &#946;catenin/Tcf4 target genes.

These data emphasize the complexity of Wnt signaling and have intriguing implications regarding cross-regulation of the pathway, especially in stem cells. Also, since not all cells are capable of responding to Wnt3A by activation of these auxiliary pathways, this work identifies novel mechanisms that could underlie cell type-specific responses to Wnts and provides mechanistic insight into cellular responses to Wnt concentration gradients. Moreover, this work identifies novel transcriptional mechanisms important for promoting osteogenic cell fate specification, which could ultimately provide new therapeutic targets in disease states with bone loss or ineffective bone formation.