Essays on Using Options to Elicit Market Beliefs about Mergers 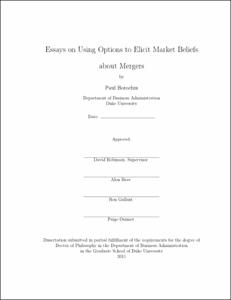 reflect beliefs about their values both in the merged and

standalone states, as well as the likelihood of either outcome.

These beliefs determine stock price reactions to news of a possible

merger, but those prices alone do not contain sufficient information

to identify the latent beliefs that they reflect. I develop a new

method which, by using additional data in the form of option prices,

is able to identify these beliefs. This method allows for a clear

decomposition of a negotiating firm's expected value change into two

parts: the value of the transaction to the firm, and new information

about its standalone value. Previous research into estimating

merger synergies has struggled to obtain an appropriate alternative

against which to measure the realized outcome. The market's beliefs

about state-contingent firm values give an estimate of both. Through

merged and standalone states, I obtain a strong, practical measure

of the expected value-creating potential of a merger before its

The second essay applies the state-contingent payoff estimation method developed previously to addressing questions about the size effect in mergers. A growing body of evidence indicates that large acquisitions destroy value. However, we do not yet know why. Several theories have been advanced, but their effects are difficult to observe in isolation. It has thus been impossible to tell whether negative post-announcement acquirer returns are caused by market expectations of value-destroying acquisitions or revealed bad news about standalone value. This paper resolves this issue by decomposing expectations about merger outcomes into expected value change from completing the acquisition and revision of beliefs about standalone firm value. The data show that deal size is correlated with value destruction, while acquirer size is correlated with release of unfavorable information. Deal size correlates with value destruction, acquirer size with bad news about the firm. Furthermore, the results suggest that overpayment is a prerequisite for large acquisitions. These findings reduce the set of possible theoretical explanations for the size effect.