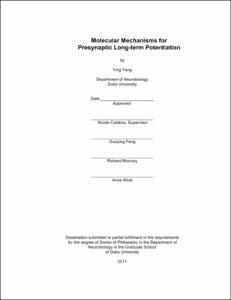 Long-term plasticity, the long-lasting, activity-dependent change in synaptic efficacy, is a fundamental property of the nervous system. Presynaptic forms of long-term plasticity are widely expressed throughout the brain, having been described in regions such as the cortex, cerebellum, hippocampus, thalamus, amygdala and striatum. Presynaptic long-term potentiation (LTP) is associated with an increase in presynaptic release probability, but further evidence of the cellular basis for the change in release probability is not known. At the molecular level, presynaptic LTP is known to require protein kinase A, the synaptic vesicle protein, Rab3A, and the active zone protein, RIM1alpha. RIM1alpha, a presynaptic scaffold protein, binds to many molecules with known functions at different stages of the neurotransmitter release process and the synaptic vesicle cycle. Understanding which interactions of RIM1alpha mediate presynaptic LTP would shed light on the molecular and cellular mechanisms for presynaptic long-term plasticity.

manipulation of presynaptic proteins at hippocampal mossy fiber synapses, where presynaptic LTP is expressed. With this platform, I perform structure-function analysis of RIM1alpha in presynaptic LTP. I find that RIM1alpha phosphorylation by PKA at serine 413 is not required for mossy fiber LTP, nor does RIM1alpha-Rab3A interation. These findings suggest that RIM1alpha, Rab3A and PKA signaling, instead of functioning synergistically, may represent separate requirements for presynaptic long-term plasticity. I then tested whether Munc13-1, a priming protein, is an effector for RIM1alpha in presynaptic LTP and provide the first evidence for the involvement of Munc13-1 in presynaptic long-term synaptic plasticity. I further demonstrate that the interaction between RIM1alpha and Munc13-1 is required for this plasticity. These results further our understanding of the molecular mechanisms of presynaptic plasticity and suggest that modulation of vesicle priming may provide the cellular substrate for expression of LTP at mossy fiber synapses.