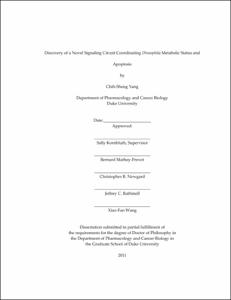 Apoptosis is a conserved mode of cell death executed by a group of proteases named caspases, which collectively ensure tissue homeostasis in multicellular organisms by triggering a program of cellular "suicide" in response to developmental cues or cellular damage.

Accumulating evidence suggests that cellular metabolism impinges directly upon the decision to initiate cell death. Several links between apoptosis and metabolism have been biochemically characterized. Using <italic>Xenopus</italic> oocyte extracts, our laboratory previously discovered that caspase-2 is suppressed by NADPH metabolism through an inhibitory phosphorylation at S164. However, the physiological relevance of these findings has not been investigated at the whole organism level. Studies presented in this dissertation utilize both Schneider's <italic>Drosophila</italic> S2 (S2) cells and transgenic animals to untangle the influence of metabolic status on fly apoptosis.

Given the regulatory role of NADPH in the activation of Dronc in <italic>Drosophila</italic> and caspase-2 in vertebrates, we then attempted to further elucidate the underlying signaling pathways. By tracking the catabolic fate of NADPH, we revealed that fatty acid synthase (FASN) activity was required for the metabolic suppression of Dronc, as both the chemical inhibitor orlistat and FASN dsRNA abrogated NADPH-mediated protection against CHX-induced apoptosis in S2 cells. Interestingly, it has been previously demonstrated that blocking FASN induces cell death in numerous cancers, including ovarian cancer; however, the mechanism is still obscure. As our results predict that suppression of FASN activity may prevent the inhibitory phosphorylation of Dronc and caspase 2 (at S130 and S164 respectively), we examined the contribution of caspase-2 to cell death induced by orlistat using ovarian cancer cells. Indeed, caspase-2 S164 was dephosphorylated upon orlistat treatment, initiating the cleavage and activation of caspase-2 and its downstream target, Bid. Knockdown of caspase-2 significantly alleviated orlistat-induced cell death, further illustrating its involvement.

Lastly, we developed an assay based on bimolecular fluorescence complementation (BiFC) to monitor the oligomerization of Dronc in S2 cells, a crucial step in its activation. The sensitivity of this assay has been validated with several apoptotic stimuli. A future whole-genome screen employing this assay is planned to provide new insights into this complex apoptotic regulatory network by unbiasedly identifying novel apoptotic regulators.