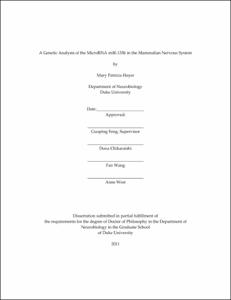 The development and function of the nervous system relies on complex regulation of gene expression programs. MicroRNAs (miRNAs) are small RNAs that have diverse functions in mammalian development and disease. In concert with the RNA-induced silencing complex, miRNAs repress translation by binding to target mRNAs. The nervous system contains the largest proportion of miRNAs, yet few have been functionally characterized <italic>in vivo</italic>.

miR-133b is a highly conserved miRNA embedded in the sequence of 7H4, a noncoding RNA that is enriched at the neuromuscular junction (NMJ), a large synapse that is essential for eliciting muscle contraction and movement. I have found that, like 7H4, miR-133b expression is enriched at the NMJ and upregulated postnatally, coinciding with important events in synaptic maturation, including synaptic growth and elimination. Knockdown of miR-133b in postnatal muscle by electroporation of modified antisense oligonucleotides gave rise to abnormally large synapses, indicating a role for miR-133b in synaptic maturation. To specifically remove miR-133b <italic>in vivo</italic>, I generated a mouse containing a targeted deletion of the miR-133b stemloop. NMJ maturation and synapse elimination proceeded normally in miR-133b knockout mice, suggesting that miR-133b may have other functions at the synapse. The expression of 7H4 and miR-133b is upregulated following nerve transection, consistent with a role in synaptic regeneration. Indeed, NMJ reinnervation is delayed in miR-133b KO mice following nerve crush, but not nerve cut. These data suggest that miR-133b may have a specific protective function at the synapse that could be relevant to disease states, including amyotrophic lateral sclerosis (ALS), where NMJ denervation occurs following motor neuron cell death. However, loss of miR-133b did not affect survival or disease progression in the SOD1(G93A) mouse model, differentiating its role from that of miR-206, another miRNA found in 7H4.

miR-133b has recently been proposed to regulate the development and maintenance of midbrain dopaminergic (mDA) neurons. mDA neurons have critical functions in the control of movement and emotion, and their degeneration leads to motor and cognitive defects in Parkinson's disease. miR-133b is enriched in the midbrain and regulates mDA neuron differentiation <italic>in vitro</italic> by targeting Pitx3, a transcription factor required for appropriate development of substantia nigra DA neurons. However, the function of miR-133b in the intact midbrain has not been determined. miR-133b KO mice have normal numbers of midbrain dopaminergic neurons during development and aging. Moreover, dopamine neurotransmitter levels are unchanged in the striatum and other brain regions, while expression of dopaminergic genes including Pitx3 is also unaffected. Finally, miR-133b null mice display normal motor coordination and activity, suggesting that miR-133b does not play a significant role in the development or maintenance of the mDA neuron population.