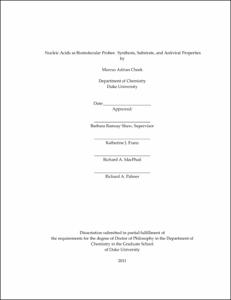 In boranophosphate (BP) nucleotides, a borane (BH3) group is substituted for a non-bridging phosphoryl oxygen of a normal phosphate group, resulting in a class of modified isoelectronic DNA and RNA mimics that can modulate the reading and writing of genetic information. 5'-(&#945;-P-borano)nucleoside triphosphates (NTP&#945;Bs) are good substrates or inhibitors for many viral RNA polymerases and reverse transcriptases (RT) when compared with natural nucleoside 5'-triphosphates (NTPs). A practical aspect of this coding phenomenon employs T7 bacteriophage DNA-dependent RNA polymerase (DdRP) to synthesize BP-modified RNA utilizing NTP&#945;Bs as monomeric substrates. Additionally, the &#945;-P-borano modification can be used to probe the catalytic phosphoryl transfer mechanism used by viral polymerases, and possibly enhance existing anti-viral chain terminating nucleotides.

The primary goal of this dissertation is to better understand the effects of NTP&#945;Bs on the activity of viral polymerases. In the last decade several NTP&#945;Bs have been shown to be efficient and selective substrates for wild-type (wt) and, to a greater extent, HIV and MMLV drug-resistant viral reverse transcriptases. More recently NS5B, the Hepatitis C viral RNA-dependent RNA polymerase (HCV RdRP), is a viable target for nucleotide-based inhibition studies. Due to the similarities between the active sites of HIV-RT and HCV NS5B, it is therefore relevant to investigate the substrate properties of this unique modification. We investigated, for the first time, the inhibition kinetics of HCV NS5B&#916;55 RdRP by two newly synthesized NTP&#945;B analogs: 2'-O-methyladenosine 5'-(&#945;-P-borano) triphosphate (2'-OMe ATP&#945;B, 9a) and 3'-deoxyadenosine 5'-(&#945;-P-borano) triphosphate (3'-dATP&#945;B, 9b) and the steady state incorporation kinetics of ATP&#945;B (51a). Our results showed that:

(2) Additionally 9a and 9b demonstrated a 5- and 21-fold lower inhibition constant (Ki) respectively when compared with the natural phosphate. Both compounds retained the competitive inhibition behavior of their parent nucleotides.

(3) HCV NS5B&#916;55 preferred the Rp isomer of ATP&#945;B (Vmax/Km = 0.095) over the natural ATP substrate (Vmax/Km = 0.057). None of the Sp isomers were substrates for HCV NS5B&#916;55. We further concluded that wild-type (wt) HCV NS5B seems to discriminate against 3'-deoxy NTPs via lost interactions between the 3'-OH on the ribose and the active site residues, or lost intramolecular hydrogen bonding interactions between the 3'-OH and the pyrophosphate leaving group during phosphoryl transfer. The overall implications of this proof of concept study are that existing viral RdRP inhibitors could be retro-fitted with the boranophosphate modification to possibly increase potency.

This dissertation also explored the synthesis of anti-HIV-RT boranophosphate nucleotides which act through a chain terminating or mutagenic mechanism. 2'-3'-didehydro-2'-3'-dideoxythymidine 5'-(&#945;-P-borano)-diphosphate (D4TDP&#945;B, 30) was synthesized and later stereoselectively phosphorylated to yield the Rp-form of D4TTP&#945;B (31). This was tested as a substrate in two multi-drug resistant forms of HIV-RT. Additionally, the NTP&#945;B analogue of the mutagenic 5-aza-5,6-dihydro-2'-deoxycytidine (KP-1212-TP&#945;B, 16) was synthesized with the eventual goal of inducing error catastrophe during viral genomic replication.

Lastly we detail the extraction and purification of gemcitabine (dFdC) from Gemzar® drug mixture using a derivatization method that produced a protected form of gemcitabine nucleoside. This protected gemcitabine was then used to synthesize gemcitabine 5'-triphosphate (dFdCTP, 42).