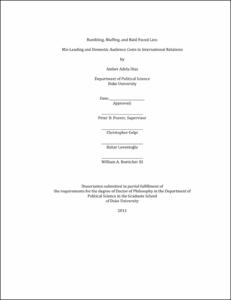 In a democratic society, does the electorate approve of truth and disapprove of deception, do opinion patterns exclusively mimic partisan elite views, or do opinion patterns react exclusively to successful or failed outcomes? Do citizens hold leaders accountable for the perceived truthfulness of foreign policy claims or do they only evaluate whether or not the policies were successful? The existing literature on public opinion and foreign policy calls the accountability role for the public "audience costs," and specifies that concerns about audience costs constrain leaders. However, the literature is not clear on what role normative issues may play in generating audience costs. This gap in the literature is notable because so much of the debate surrounding significant policy issues, especially war-making and military action, is couched in retrospective, normative, moralizing language. These debates make no sense if the pragmatic, forward-looking dimensions of audience costs - reliability and success - are all that exist. Through a survey experiment and four historical case studies developed with primary and secondary historical sources, news articles, and polling data, I find that there is a complex dynamic at work between the public's desire for successful outcomes and the high value placed upon truth-telling and transparency within a democracy. Studying justifications for military action and war, I find that the public will be motivated to punish leaders perceived as deceptive, but that imposition of audience costs will be moderated by factors including partisanship, degree of elite unity, and the leader's damage control strategy in response to disapproval.