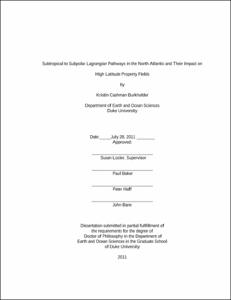 In response to the differential heating of the earth, atmospheric and oceanic flows constantly act to carry surplus energy from low to high latitudes. In the ocean, this poleward energy flux occurs as part of the large scale meridional overturning circulation: warm, shallow waters are transported to high latitudes where they cool and sink, then follow subsurface pathways equatorward until they are once again upwelled to the surface and reheated. In the North Atlantic, the upper limb of this circulation has always been explained in simplistic terms: the Gulf Stream/North Atlantic Current system carries surface waters directly to high latitudes, resulting in elevated sea surface temperatures in the eastern subpolar gyre, and, because the prevailing winds sweeping across the Atlantic are warmed by these waters, anomalously warm temperatures in Western Europe. This view has long been supported by Eulerian measurements of North Atlantic sea surface temperature and surface velocities, which imply a direct and continuous transport of surface waters between the two gyres. However, though the importance of this redistribution of heat from low to high latitudes has been broadly recognized, few studies have focused on this transport within the Lagrangian frame.

The three studies included in this dissertation use data from the observational record and from a high resolution model of ocean circulation to re-examine our understanding of upper limb transport between the subtropical and subpolar gyres. Specifically, each chapter explores intergyre Lagrangian pathways and investigates the impact of those pathways on subpolar property fields. The findings from the studies suggest that intergyre transport pathways are primarily located beneath the surface and that subtropical surface waters are largely absent from the intergyre exchange process, a very different image of intergyre transport than that compiled from Eulerian data alone. As such, these studies also highlight the importance of including 3d Lagrangian information in examinations of transport pathways.