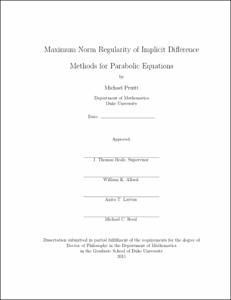 independent of time, valid for large time steps. These results are almost

sharp; the regularity property for first differences of the numerical solution

is of the same form as that of the continuous problem, and the regularity

diffusion equation, and is in the spirit of work by Aronson, Widlund and

To prove maximum norm regularity properties for the homogeneous problem,

we introduce a semi-discrete problem (discrete in space, continuous in time).

a sector of the complex plan by constructing a fundamental solution.

From the bounds obtained on the evolution operator and its spatial differences,

problem follow from the homogeneous results using Duhamel's principle. The results for the inhomogeneous

imply that when the time step is taken proportional to the grid width, the rate of convergence of the numerical solution and its first

differences is second-order in space, and the rate of convergence for second

is second-order except for logarithmic factors .

As an application of the theory, we prove almost sharp maximum norm resolvent estimates for divergence

form elliptic operators on spatially periodic grid functions. Such operators are invertible, with inverses and their first differences bounded in maximum norm, uniformly in the grid width. Second differences of the inverse operator are bounded except for logarithmic factors.