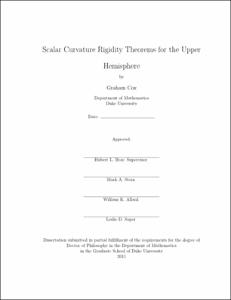 While the conjecture as originally stated has recently been disproved, there are still many interesting modications to consider. For instance, it has been shown that Min-Oo's rigidity conjecture holds on sufficiently small geodesic balls contained in the upper hemisphere, for metrics sufficiently close to the spherical metric. We show that this local rigidity phenomena can be extended to a larger class of domains in the hemisphere, in particular finding that it holds on larger geodesic balls, and on certain domains other than geodesic balls (which necessarily have more complicated boundary geometry). We discuss a possible method for finding the largest possible domain on which the local rigidity theorem is true, and give a Morse-theoretic interpretation of the problem.

Another interesting open question is whether or not such a rigidity statement holds for metrics that are not close to the spherical metric. We find that a scalar curvature rigidity theorem can be proved for metrics on sufficiently small geodesic balls in the hemisphere, provided certain additional geometric constraints are satisfied.