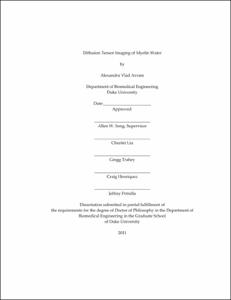 In recent years, the emergence of diffusion tensor imaging (DTI) has provided a unique means via water diffusional characteristics to investigate the white matter integrity in the human brain, and its impact on neuronal functions. However, since the characterization of white matter integrity using DTI often lacks tissue specificity, most research studies report changes in anisotropy that are not explicitly correlated with particular cellular origins. To improve the utility of DTI in translational neuroimaging, it is critical to develop DTI acquisition techniques that are quantitative and tissue specific.

There are, nevertheless, existing methods for tissue specificity. For example, myelin water images can be generated using multiple echo time (TE) or magnetization transfer techniques. These techniques can detect changes in the concentration of myelin associated markers, but not in their spatial organization. Most white matter pathologies however start with early microstructural changes in the myelin sheaths during which the tissue contents remain similar and are thus not differentiable on a conventional MR image. Thus, the ability to construct a diffusion tensor that is myelin specific can have an immediate impact on our better understanding myelin physiology and pathophysiology during brain development.

Unfortunately, the myelin water signal decays rapidly because of its short transverse relaxation time constant (T2 < 50 ms), especially in DTI experiments where the echo time (TE) can be as large as 100ms. Even in special cases where the TE is shorter, the lack of myelin selectivity in conventional DTI techniques makes assessment of myelin microstructure extremely challenging. Thus we need to develop a DTI methodology that will greatly shorten the TE and allow myelin selectivity.

To address these challenges we have developed innovative DTI acquisition methodologies that can specifically assess myelin microstructural changes in white matter. To preserve more signal from myelin water we used a stimulated echo DTI implementation. In our initial approach we integrated this sequence with a magnetization transfer preparation to achieve additional differentiating sensitization to myelin water and derive a myelin water weighted (MWW) diffusion tensor. Our results indicate that, compared to the conventional DTI, myelin water diffuses along the axis of the fiber, but has the same has larger fractional anisotropy (FA) due to significantly smaller radial diffusivity. The limited specificity of MT and high radio frequency power deposition of MT-DTI restrict its applicability in clinical studies.

To obtain increased myelin specificity we implemented a robust stimulated echo DTI sequence with segmented spiral-out readout trajectory for achieving minimal TE on clinical MRI scanners. To ensure high spatial accuracy throughout the DTI scan we further develop a methodology for inherently and dynamically correcting both motion induced phase errors and off-resonance effects due to magnetic field inhomogeneities (including eddy currents) in the reconstructed image. We the used this technique to conduct an unprecedented experiment in which we collected DTI images at multiple echo times (as short as 18ms) and characterized the dependence of anisotropy on the T2 components including myelin water. The results confirmed the anisotropy characteristics of myelin water found with our initial previous approach.

Building on this new information, we designed a MWW-DTI method based on the simultaneous acquisition of DTI images at two different echo times within clinical practical durations. It is hoped that this new DTI technique sensitized myelin microanatomy will find wide applications in monitoring healthy brain development in pediatric populations, as many developmental brain disorders start with microstructural changes in white matter.