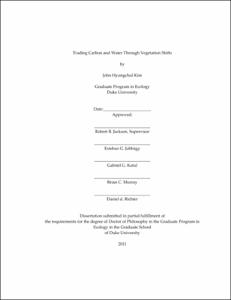 In this dissertation, I explored the effects of vegetation type on ecosystem services, focusing on services with significant potential to mitigate global environmental challenges: carbon sequestration and groundwater recharge. I analyzed >600 estimates of groundwater recharge to obtain the first global combined analysis of groundwater recharge and vegetation type. Using a regression model, I found that vegetation was the second best predictor of recharge after precipitation. Recharge rates were lowest under forests, intermediate in grasslands, and highest under croplands. The differences between vegetation types were higher in more humid climates and sandy soils but proportionately, the differences between vegetation types were higher in more arid climates and clayey soils. My extensive field estimates of recharge under paired vegetation types in central Argentina and southwestern United States provided a more direct test of the relationships between vegetation and recharge. The field data confirmed the strong influences of vegetation and its interactions with abiotic factors on recharge observed in the synthesis. The results indicate that vegetation shifts have a proportionately larger potential to affect recharge in more arid climates and clayey soils.

At the same study systems, I compared my field estimates of recharge to organic carbon stocks (in biomass, litter and soil) under the different vegetation types to evaluate tradeoffs between carbon sequestration and groundwater recharge as affected by vegetation shifts. To determine net values of vegetation shifts, I combined the changes in carbon and water with reported economic values of the ecosystem services. Based on physiological tradeoffs between photosynthesis and transpiration in plants, I hypothesized that vegetation promoting carbon storage would reduce recharge and vice versa. Changes in water and carbon services were inversely proportional, with rain-fed cultivation increasing groundwater recharge but decreasing carbon storage compared to the grasslands they replaced whereas woody encroachment did the opposite. In contrast, cultivated plots irrigated with ground water decreased both ecosystem services. Higher precipitation and clay content both exacerbated changes in carbon storage with grassland conversions, whereas higher precipitation accentuated, but higher clay content diminished, those in recharge. Regardless of the nature of vegetation shift, most of the net values of grassland conversions were negative, with the shifts representing increasing costs in the following order: woody encroachment, rain-fed cultivation and irrigated cultivation. Values of changes in carbon were greater in magnitude than those of recharge, indicating that establishment of carbon markets may drive land-use changes in grasslands over water markets.

Lastly, I examined the effects of changes in subsurface hydrology resulting from grassland conversion to croplands on soil inorganic carbon stocks in the same U.S. study system. I observed significantly lower inorganic carbon stocks under both rain-fed and irrigated croplands compared to the grasslands they replaced. The losses were visible to past 6 m depth in the soil profile and were uncharacteristically rapid for the carbon pool that is considered to be relatively inert. Based on the negative relationship between the inorganic carbon stocks and recharge rates and higher estimated exports of bicarbonates in recharge under croplands, I concluded that increased recharge with cultivation resulted in dissolution and leaching of grassland soil carbonates. Ecosystem services and their relationships to biotic and abiotic factors quantified here will further our understanding of the tradeoffs and interactions between the two services through vegetation shifts.