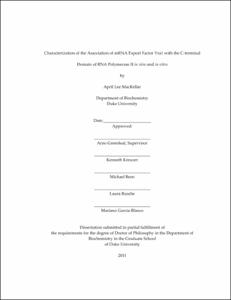 The unique C-terminal domain (CTD) of RNA polymerase II (RNAPII), composed of tandem heptad repeats of the consensus sequence YSPTSPS, is subject to differential phosphorylation throughout the transcription cycle. Several RNA processing factors have been shown to bind the appropriately phosphorylated CTD, and this facilitates their localization to nascent pre-mRNA during transcription. In <italic>Saccharomyces cerevisiae</italic>, the mRNA export protein Yra1 (ALY/REF in metazoa) has been shown to cotranscriptionally associate with mRNA and is thought to deliver it to the nuclear pore complex for export to the cytoplasm. Based on a previous proteomics screen, I hypothesized that Yra1 is a <italic>bona fide</italic> phosphoCTD associated protein (PCAP) and that this interaction is responsible for the pattern of Yra1 cotranscriptional association observed <italic>in vivo</italic>. Using <italic>in vitro</italic> binding assays, I show that Yra1 directly binds the hyperphosphorylated form of the CTD characteristic of elongating RNAPII. Using truncations of Yra1, I determined that its phosphoCTD-interacting domain (PCID) resides in the segment comprising amino acids 18-184, which, interestingly, also contains the RNA Recognition Motif (RRM) (residues 77-184). Using UV crosslinking, I found that the RRM alone can bind RNA, although a larger protein segment, extending to the C-terminus (aa 77-226), displays stronger RNA binding activity. Even though the RRM is implicated in both RNA and CTD binding, certain RRM point mutations separate these two functions: thus, mutations that produce defects in RNA binding do not affect CTD binding. Both functions are important <italic>in vivo</italic>, in that RNA binding-defective or CTD binding-defective versions of Yra1 engender growth and mRNA export defects. I also report the construction and characterization of a useful new temperature sensitive <italic>YRA1</italic> allele (<italic>R107AF126A</italic>). Finally, using chromatin immunoprecipitation, I demonstrate that removing the N-terminal 76 amino acids of Yra1 (all of the PCID up to the RRM) results in a 10-fold decrease in Yra1 recruitment to genes during elongation. These results indicate that the PCTD is likely involved directly in cotranscriptional recruitment of Yra1 to active genes.