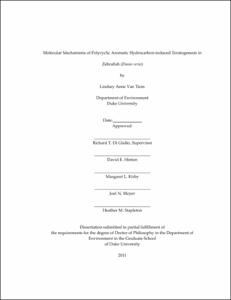 Polycyclic aromatic hydrocarbons (PAHs) are ubiquitous environmental contaminants formed from the incomplete combustion of fossil fuels and are found in the environment as complex mixtures. PAHs are developmentally toxic to fish, causing yolk sac edema, hemorrhaging, craniofacial malformations and cardiac defects including impaired heart looping, elongated heart, decreased blood flow, and pericardial effusion. Previous research has shown that many of the toxic effects of PAHs are mediated through the aryl hydrocarbon receptor (AHR), which upregulates phase I and II metabolic genes, but the underlying mechanisms of PAH-induced toxicity are not yet known. The primary goal of this dissertation was to better understand the molecular mechanisms by which PAH mixtures cause developmental toxicity in fish. To this end, the zebrafish (Danio rerio) was used as a developmental model. Simple mixtures consisting of a PAH that is an AHR agonist (benzo[a]pyrene or benzo[k]fluoranthene) and a PAH that is a cytochrome P450 1 (CYP1) inhibitor (fluoranthene) were used in these experiments along with the dioxin-like compound 3,3',4,4',5-pentachlorobiphenyl (PCB-126). Morpholino gene knockdown was used to examine the role of specific genes in response to PAHs, gene expression changes in response to PAH exposures were examined via QPCR, quantification of pericardial effusion was used as a metric for cardiac toxicity, and CYP1 activity was measured as an indication of AHR pathway induction. First, PAH mixtures consisting of an AHR agonist (BkF) and a CYP1 inhibitor (FL) induced cardiac toxicity that was preceded by upregulation of CYP1 and redox-responsive gene expression, and these effects were dependent upon the AHR2. Second, knockdown of glutathione s-transferase pi class 2 (GSTp2), part of phase II metabolism, exacerbated PAH-induced toxicity but did not affect PCB-126-induced toxicity. Third, knockdown of another isoform of the AHR, AHR1, exacerbated PAH- and PCB-126-induced toxicity and increased CYP1 activity but did not affect CYP expression in response to these agonists. Simultaneous knockdown of AHR1A and AHR2 did not exacerbate nor ameliorate PAH-induced toxicity but did prevent PCB-126-induced toxicity. Fourth, to examine AHR2-dependent and AHR2-independent gene induction in zebrafish hearts in response to PAHs, microarrays were used. Gene expression changes caused by PAHs were largely AHR2-dependent and consisted of genes involved in cell adhesion, oxidation-reduction, and TGF-&beta signaling processes as well as genes involved in heart structure and function. These findings help to elucidate how PAHs elicit deformities during development and highlight differences between PAHs and other AHR agonists. Additionally, these experiments have identified other genes in addition to AHR2 that are involved in mediating or responding to the toxicity of PAHs.